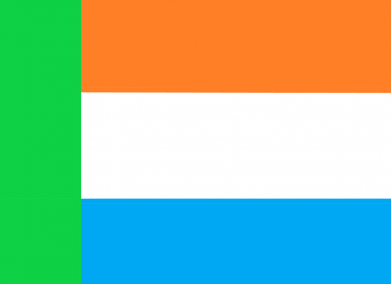 The Second Republic of Potass is a massive, orderly nation, ruled by Osas with an iron fist, and renowned for its anti-smoking policies, ubiquitous missile silos, and pith helmet sales. The hard-nosed, cynical, humorless population of 3.517 billion Potassians are kept under strict control by the oppressive government, which measures its success by the nation's GDP and refers to individual citizens as "human resources."

The medium-sized, corrupt, moralistic, well-organized government prioritizes Defense, although Law & Order, Education, and Healthcare are also considered important, while Spirituality and International Aid are ignored. It meets to discuss matters of state in the capital city of Donsmark. Citizens pay a flat income tax of 64.7%.

The frighteningly efficient Potassian economy, worth 475 trillion Big Balls a year, is broadly diversified and led by the Information Technology industry, with major contributions from Arms Manufacturing, Uranium Mining, and Woodchip Exports. Black market activity is rampant. State-owned companies are common. Average income is an impressive 135,306 Big Balls, with the richest citizens earning 6.3 times as much as the poorest.

The Police Surveillance Unit's motto is "Gotta Catch 'Em All", nuclear submarines have been deployed to protect the nation's banana supply, the Potassian war navy contains an oddly large number of luxury yachts and cruise liners, and politicians are often seen with soldiers pointing guns at their heads. Crime, especially youth-related, is totally unknown, thanks to a well-funded police force and progressive social policies in education and welfare. Potass's national animal is the Duck, which teeters on the brink of extinction due to toxic air pollution, and its national religion is Christianity.