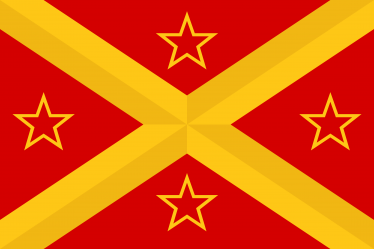 The Red Fleet contains 6 nations, the 2,717th most in the world.

The Lowest Crime Rates in The Red Fleet

World Census agents attempted to lure citizens into committing various crimes in order to test the reluctance of citizens to break the law.

As a region, The Red Fleet is ranked 9,478th in the world for Lowest Crime Rates.

The Red Fleet Regional Message Board

In its first operation since the defense of The Internationale, The Red Fleet struck down five fascist regions at minor update on April 26, including two regions classified as observer regions by the Right Wing Uprising.

Hitler Incorporated, Greater Reich of New Germania, The Celtic Federation, The United Nations Of Rowania, and The Anti Globalist Alliance all sustained direct hits from The Red Fleet's torpedo salvo. After six months without an operation, The Red Fleet gave an impressive showing by timing its entry into the targeted regions to accuracy within one minute.

We expect the Fash to try to twist this as a meaningless operation, but they know what it means to have an active and mobile Fleet back in the waters. :)

Participating in the raid were Admiral Misley as point and trigger, and Sailor Kryftland as endorser. For his participation, Kryftland is promoted to Senior Sailor.

Want to join us in future operations? Fill out a Rate Application on our forum!

Misley
Admiral of The Red Fleet

Led by Misley and the Nautical Brothers and Sisters of The Red Fleet, the Alliance Against Nazis has been refounded.

Alliance Against Nazis has long been an anti-fascist region, formerly founded by Comrade K-714. Following comrade K-714's retirement, the region was refounded by The Red Fleet and Syndicated Red-Black Tendencies before the founder again ceased to exist.

The region's importance as a late-updating region (currently the 176th-to-last region to update) gave it military significance as a lucrative launch point for anti-fascist forces. Similar launch points are used by many invader and defender organizations in NationStates, though none before AAN have formally been established for use by Antifa.

Solidarity provided by The MT Army, North Korea, In The Flesh, Alliance Of Armed Nations, and Argentina.

Sorry if I missed anyone - thank you all for the support during a somewhat lengthy but fruitful mission!

Misley
Admiral of The Red Fleet

NAZI EUROPE, once the crown jewel of Right Wing Uprising, has been refounded in the conclusion of a month-long operation initiated by Lone Wolves United, The North Pacific, and the United Imperial Armed Forces. The Red Fleet worked in conjunction with these militaries and other raiders and leftist and antifascist military forces to bring down NAZI EUROPE, and the efforts of all involved antifascist soldiers has been recognized by the Admiralty Board with the presentation of the medal "Antifascist Unity in NAZI EUROPE."

More details can be found in this dispatch:

by The red fleet admiralty

PRESENTATION OF THE MILITARY DECORATION

AUTHORIZED BY ORDER OF THE RED FLEET ADMIRALTY BOARD

On June 3, 2014, NAZI EUROPE, one of the largest Nazi regions on NationStates and a founding Gold-level member of Right Wing Uprising was invaded by forces from The North Pacific and The United Imperial Armed Forces. The next day, The Red Fleet and The MT Army joined the invasion force.

On June 18, NAZI EUROPE was briefly retaken by Right Wing Uprising, only to be finally retaken by a multiregional update force on June 20 that included Antifa soldiers. Following the reclamation of NAZI EUROPE, Antifa soldiers and citizens were called upon to pile into the region, peaking at 28 nations. These 28 nations provided 1/3 of the endorsements for Tancerlo, making Antifa one of the strongest supporters of the invasion, which ended on July 7 with the establishment of a new secret password and the removal of all forces. The operation fully concluded on July 15, when NAZI EUROPE was refounded.

For their participation in this historic raid, the following nations are presented the Medal "Antifascist Unity in NAZI EUROPE" on behalf of the Admiralty Board of The Red Fleet.

* Non-Antifa personnel receiving this award for their instrumental role in this operation.

Presented on behalf of the Admiralty Board of The Red Fleet to Antifa Soldiers, July 9, 2014.

Leninist Russia, a region that has shared embassies with Antifa for over two years, was the target of an invasion by The Tripartite Pact, led by GGR's Leather-clad germany himself, through the thinly-veiled puppet The anti-communist matriarchy. This puppet is part of GGR's bizarre "misandrist" parody group, The Great Gynarchy, which presumably targeted Leninist Russia due to its former members' feminist stance.

LCG admitted ownership of the puppet in telegrams to Baronet of ancoats, who had entered the region under a fascist flag, seizing the delegacy with the assistance of a combination of Red Fleet sailors and MT Army soldiers who entered under similar disguise. The Fash failed to respond to this incursion adequately, even believing the ruse and asking the The Red Fleet and MT Army militants to endorse Tripartite Pact soldiers. Unfortunately for them, after several updates, they found themselves in The Rejected Realms!

Over the following month, the region was defended by soldiers from The Red Fleet, The MT Army, North Korea, Das Kommune, In The Flesh, and several independent Antifa comrades. Tonight, the region has been secured by a secret password, and soldiers will begin to draw down as they receive new orders from their respective commanders.

Expansion of the Admiralty Board

Comrade Timchiland, formerly a Lieutenant in The Red Fleet, has been promoted to the Admiralty Board as a Joint Squadron Admiral.

Timchiland has been a loyal sailor with The Red Fleet since joining in January, and his contributions to the Fleet, particularly in keeping the Fleet sailing through the spring, have not gone without notice.

Vetelo have joined The Red Fleet as Joint Squadron Admirals. They are formerly commanders of the Red Army of the USSR and the USSF, respectively, and have agreed to lead future operations under the ensign of The Red Fleet.

Congratulations to these comrades for their appointments to the Admiralty Board!

Capture of The Greater German Reich

On September 24, 2015, The Red Fleet stormed into the Greater German Reich arm-in-arm with comrades from across NationStates, ousting Delegate Verborgenen herrn despite Nazi attempts to bolster the region's defense.

After 36 days, The Red Fleet concluded its operation on October 30 by ejecting all remaining fascist nations, establishing a secret password, and then clearing the region of all remaining allied troops.

On November 2, 2015, the Greater German Reich was successfully refounded by The Red Fleet, permanently destroying a once-notorious bastion of Nazi players.