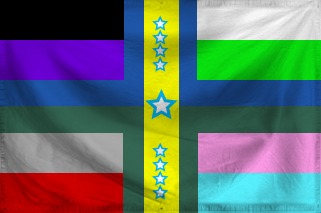 The Free Federation of Goldsaver is a gargantuan, efficient nation, ruled by President-Imperial Melis with a fair hand, and notable for its multi-spousal wedding ceremonies, unlimited-speed roads, and devotion to social welfare. The compassionate, democratic, cheerful population of 26.071 billion Akaitans hold their civil and political rights very dear, although the wealthy and those in business tend to be viewed with suspicion.

The large, liberal government juggles the competing demands of Defense, Education, and Welfare. It meets to discuss matters of state in the capital city of Marsi. The income tax rate is 100%.

The frighteningly efficient Akaitian economy, worth a remarkable 7,350 trillion Imperial Dollars a year, is fairly diversified and led by the Book Publishing industry, with major contributions from Information Technology, Arms Manufacturing, and Uranium Mining. State-owned companies are reasonably common. Average income is an amazing 281,936 Imperial Dollars, and distributed extremely evenly, with little difference between the richest and poorest citizens.

Citizens are deployed to barren deserts to protect small territorial claims, the news is showing footage of President-Imperial Melis bullying an old man to the point of tears, weird kids who eat bugs are breaking the law, and older citizens lament over the loss of law and order. Crime is totally unknown. Goldsaver's national animal is the Golden Dragon, which teeters on the brink of extinction due to toxic air pollution.

Goldsaver is ranked 20,934th in the world and 117th in The Union of Democratic States for Most Influential, scoring 1,801 on the Soft Power Disbursement Rating.