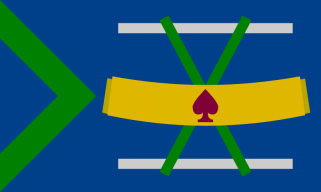 The Confederacy of Tseaby is a gargantuan, orderly nation, ruled by Leader with an iron fist, and renowned for its public floggings, multi-spousal wedding ceremonies, and strictly enforced bedtime. The hard-nosed, hard-working, cynical, humorless population of 39.946 billion Tseabians are ruled by a mostly-benevolent dictator, who grants the populace the freedom to live their own lives but watches carefully for anyone to slip up.

The relatively small, well-organized government juggles the competing demands of Environment, Education, and Law & Order. It meets to discuss matters of state in the capital city of Forra. The average income tax rate is 6.1%, but much higher for the wealthy.

The very strong Tseabyian economy, worth a remarkable 6,463 trillion guits a year, is led by the Gambling industry, with significant contributions from Book Publishing, Trout Farming, and Automobile Manufacturing. Black market activity is notable. Average income is an impressive 161,801 guits, and evenly distributed, with the richest citizens earning only 2.0 times as much as the poorest.

There is a dearth of space for new houses, the breathalyser pledge is a traditional part of marriages in Tseaby, mandatory neutering has made purebred dogs a thing of the past, and advertisements for jobs in the sciences run in fashion magazines. Crime is totally unknown, thanks to a capable police force and progressive social policies in education and welfare. Tseaby's national animal is the swamp squirrel, which frolics freely in the nation's many lush forests.

Tseaby is ranked 47,162nd in the world and 1st in Pescaia for Lowest Crime Rates, with 70.34 Law-abiding Acts Per Hour.