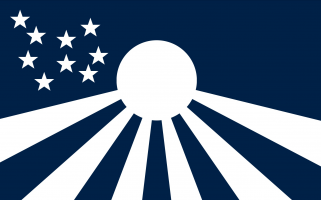 The Lunar Covenant of Itzlan is a gargantuan, efficient nation, ruled by First Admiral Aslan with an iron fist, and renowned for its public floggings, absence of drug laws, and punitive income tax rates. The hard-nosed, cynical, humorless, devout population of 14.198 billion Itzlani are kept under strict control by the oppressive government, which measures its success by the nation's GDP and refers to individual citizens as "human resources."

The relatively small, corrupt, moralistic, well-organized government juggles the competing demands of Defense, Law & Order, and Environment. It meets to discuss matters of state in the capital city of Eclipse Harbor. Citizens pay a flat income tax of 72.3%.

The frighteningly efficient Itzlanian economy, worth a remarkable 5,871 trillion Silver Foxes a year, is driven entirely by a combination of government and state-owned industry, with private enterprise illegal. However, for those in the know, there is an enormous, deeply entrenched, quite specialized black market in Arms Manufacturing, Information Technology, and Uranium Mining. The private sector mostly consists of enterprising ten-year-olds selling lemonade on the sidewalk, but the government is looking at stamping this out. Average income is an amazing 413,519 Silver Foxes, with the richest citizens earning 8.1 times as much as the poorest.

The nation's government buildings are remarkable for being ugly concrete boxes, Itzlani incessantly needle their doctors for relief, it's a marvellous night for a moon dance as the sparks on your home start to rise, and the collars keep falling off pet snakes. Crime, especially youth-related, is totally unknown, thanks to a capable police force. Itzlan's national animal is the Itzlanian Ice Fox, which frolics freely in the nation's many lush forests, and its national religion is The Lunar Cult.

Itzlan is ranked 11,055th in the world and 10th in Renegade Islands Alliance for Most Influential, scoring 4,216 on the Soft Power Disbursement Rating.