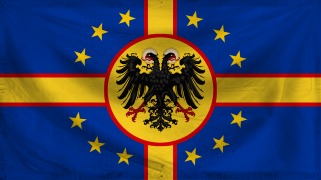 The United States of Sao Nova Europa is a massive, genial nation, ruled by President Jean-Claude Juncker with a fair hand, and renowned for its smutty television, compulsory military service, and restrictive gun laws. The compassionate, hard-working, democratic population of 2.616 billion Europeans enjoy a sensible mix of personal and economic freedoms, while the political process is open and the people's right to vote held sacrosanct.

The medium-sized government juggles the competing demands of Education, Administration, and Industry. It meets to discuss matters of state in the capital city of Brussels. The average income tax rate is 82.5%, and even higher for the wealthy.

The frighteningly efficient European economy, worth 538 trillion euros a year, is broadly diversified and led by the Information Technology industry, with major contributions from Tourism, Retail, and Book Publishing. Average income is an amazing 205,834 euros, and evenly distributed, with the richest citizens earning only 2.1 times as much as the poorest.

Artists are pillars of society, public toilets are famed for their rear entries, many in Sao Nova Europa are born in the purple, and the country has been 'going shopping' by annexing nearby nations for their resources. Crime, especially youth-related, is totally unknown, thanks to a capable police force and progressive social policies in education and welfare. Sao Nova Europa's national animal is the tiger, which frolics freely in the nation's many lush forests, and its national religion is Christianity.

Sao Nova Europa is ranked 5,036th in the world and 15th in Capitalist Paradise for Most Developed, scoring 93.62 on the Human Development Index.