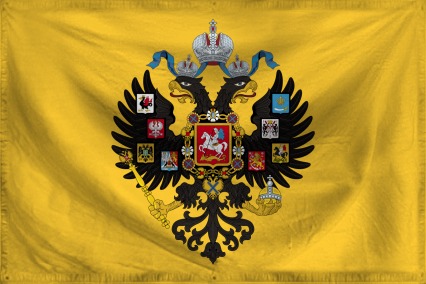 The Supreme and Exalted Empire of Gatchina is a gargantuan, orderly nation, ruled by Prime Minister Wentworth with an iron fist, and remarkable for its ritual sacrifices, multi-spousal wedding ceremonies, and complete lack of public education. The hard-nosed, hard-working, cynical, humorless, devout population of 17.768 billion Gatchinans are kept under strict control by the oppressive government, which measures its success by the nation's GDP and refers to individual citizens as "human resources."

The medium-sized, corrupt, moralistic, well-organized government prioritizes Defense, although Law & Order and Spirituality are also considered important, while Social Policy and Welfare receive no funds. It meets to discuss matters of state in the capital city of Strelsau. The average income tax rate is 84.3%, and even higher for the wealthy.

The frighteningly efficient Gatchinan economy, worth a remarkable 5,600 trillion Rubles a year, is broadly diversified and dominated by the Arms Manufacturing industry, with significant contributions from Gambling, Beef-Based Agriculture, and Retail. Black market activity is rampant. State-owned companies are common. Average income is an amazing 315,183 Rubles, and evenly distributed, with the richest citizens earning only 2.9 times as much as the poorest.

Ten-year-olds are applying for lemonade stand operator licences, flipping a coin to make a decision leads to a referral to Gambling Addiction Services, public shaming has become the favoured form of punishment, and pilots always remember to send their doctors a Maxxmas card. Crime, especially youth-related, is totally unknown, thanks to a very well-funded police force. Gatchina's national animal is the Double Headed Eagle, which soars majestically through the nation's famously clear skies, and its national religion is Judaism USCJ.

Gatchina is ranked 1,600th in the world and 1st in Krasnaya for Largest Black Market, with 1,827 trillion Standard Monetary Units.