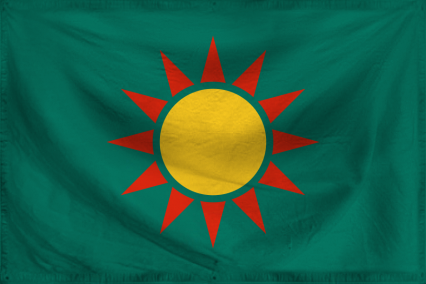 The Empire of CreativeSolutions is a massive, orderly nation, notable for its barren, inhospitable landscape, flagrant waste-dumping, and punitive income tax rates. The hard-nosed, cynical, humorless population of 2.089 billion CreativeSolvers are kept under strict control by the oppressive government, which measures its success by the nation's GDP and refers to individual citizens as "human resources."

The enormous, corrupt, moralistic, well-organized government juggles the competing demands of Administration, Education, and Welfare. It meets to discuss matters of state in the capital city of Budarest. The average income tax rate is 62.5%.

The thriving CreativeSolver economy, worth 119 trillion E-monies a year, is quite specialized and dominated by the Retail industry, with significant contributions from Uranium Mining, Door-to-door Insurance Sales, and Tourism. Black market activity is rampant. State-owned companies are reasonably common. Average income is 57,130 E-monies, and evenly distributed, with the richest citizens earning only 4.8 times as much as the poorest.

CreativeSolvers are free from pain - but the side effects include loss of individual thought and freedom, the military refers to helpless combatants offering surrender as "sitting ducks", people believe that if you teach a man to fish he won't buy fish from you any more, and people forget to eat because they are too busy singing Leader's praises. Crime, especially youth-related, is relatively low, thanks to a well-funded police force and progressive social policies in education and welfare. CreativeSolutions's national animal is the wolf, which teeters on the brink of extinction due to widespread deforestation.

CreativeSolutions is ranked 260,865th in the world and 159th in Wintercrest for Most Scientifically Advanced, scoring -150.59 on the Kurzweil Singularity Index.