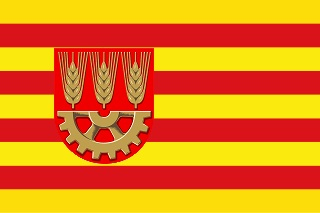 The Grand Nation of
Araraukar
Corrupt Dictatorship
Do as I say or it's the last thing you'll ever do.
Influence
Page
Region
Osiris
Civil Rights
Some
Economy
Weak
Political Freedom
Few

The Grand Nation of Araraukar is a gargantuan, safe nation, ruled by Leader with an iron fist, and notable for its frequent executions, irreverence towards religion, and punitive income tax rates. The compassionate, cynical, humorless population of 27.44 billion Araraukarians are ruled with an iron fist by the dictatorship government, which ensures that no-one outside the party gets too rich. In their personal lives, however, citizens are relatively unoppressed; it remains to be seen whether this is because the government genuinely cares about its people, or if it hasn't gotten around to stamping out civil rights yet.

The large, corrupt, socially-minded government juggles the competing demands of Education, Environment, and Law & Order. It meets to discuss matters of state in the capital city of Araukar City. The income tax rate is 100%.

The enormous but sluggish Araraukarian economy, worth a remarkable 2,793 trillion rauks a year, is driven almost entirely by government activity, with private enterprise illegal. The industrial sector is mostly comprised of enterprising ten-year-olds selling lemonade on the sidewalk, although the government is looking at stamping this out. Average income is an impressive 101,819 rauks, and distributed extremely evenly, with practically no difference between the richest and poorest citizens.

Coffee cups have grown in size to accommodate the huge ingredients list, hit TV comedies "The Big Government Theory" and "Young Leader" have high ratings but low quality, no one engages in 'locker room talk' any more, and the government confiscates candy from babies for 'the greater good' of the nation. Crime, especially youth-related, is totally unknown, thanks to the all-pervasive police force and progressive social policies in education and welfare. Araraukar's national animal is the Jammydragon, which soars majestically through the nation's famously clear skies.

Araraukar is ranked 4,774th in the world and 238th in Osiris for Largest Welfare Programs, scoring 6,902.53 on the Safety Net Mesh Density Rating.