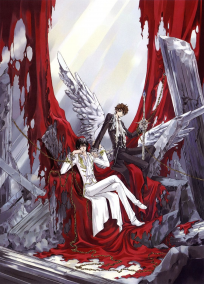 The Republic of -I-Ship It is a huge, cultured nation, notable for its state-planned economy, soft-spoken computers, and anti-smoking policies. The hard-nosed, cynical, devout population of 743 million -I-Ship Itians are ruled by a mostly-benevolent dictator, who grants the populace the freedom to live their own lives but watches carefully for anyone to slip up.

The all-consuming -I-Ship Itian economy, worth 63.4 trillion dollars a year, is driven entirely by a combination of government and state-owned industry, with private enterprise illegal. However, for those in the know, there is a slick, highly efficient black market in Beef-Based Agriculture, Information Technology, Arms Manufacturing, and Book Publishing. The private sector mostly consists of enterprising ten-year-olds selling lemonade on the sidewalk, but the government is looking at stamping this out. Average income is 85,370 dollars, and evenly distributed, with the richest citizens earning only 3.6 times as much as the poorest.

Hospitals are cleaned with lemons and vinegar, citizens live in superstitious fear of the mysterious glowing clouds that float over -I-Ship It, citizens applying for their first jobs face fierce competition from the homeless, and the new national mascot has to be wheeled onto the field of play. Crime, especially youth-related, is totally unknown, thanks to a very well-funded police force and progressive social policies in education and welfare. -I-Ship It's national animal is the kiwi, which teeters on the brink of extinction due to widespread deforestation.

-I-Ship It is ranked 50,681st in the world and 13th in Democratic Socialist Assembly for Most Authoritarian, with 1,095.21 milliStalins.