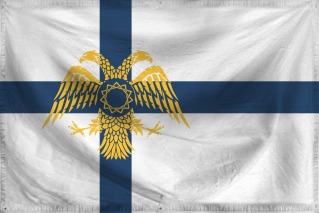 The Empire of the Golden Throne of The Macabees is a gargantuan, efficient nation, remarkable for its multi-spousal wedding ceremonies, keen interest in outer space, and spontaneously combusting cars. The hard-nosed, hard-working, democratic, humorless population of 37.12 billion Macabeans live in a state of perpetual fear, as a complete breakdown of social order has led to the rise of order through biker gangs.

There is no government in the normal sense of the word; however, a small group of community-minded, liberal, pro-business, outspoken individuals juggles the competing demands of Law & Order, Industry, and Education. Income tax is unheard of.

The frighteningly efficient Macabean economy, worth an astonishing 13,519 trillion Ríokmarks a year, is driven almost entirely by the private sector, which is broadly diversified and led by the Arms Manufacturing industry, with major contributions from Uranium Mining, Information Technology, and Book Publishing. Average income is an amazing 364,216 Ríokmarks, but there is a large disparity between incomes, with the richest 10% of citizens earning 1,363,772 per year while the poor average 68,051, a ratio of 20.0 to 1.

Victims of crime are viewed as less trustworthy than politicians, there is a disproportionate number of poor people in prison, every new toxic waste dump comes with a seal of approval from the government's science advisor, and workers have their fruitcake and eat it too. Crime, especially youth-related, is all-pervasive, probably because of the absence of a police force. The Macabees's national animal is the Imperial Eagle, which is also the nation's favorite main course.

The Macabees is ranked 267th in the world and 3rd in Greater Dienstad for Largest Automobile Manufacturing Sector, scoring 26,424.91 on the Henry Ford Productivity Index.

Most Recent Government Activity: 91 minutes ago