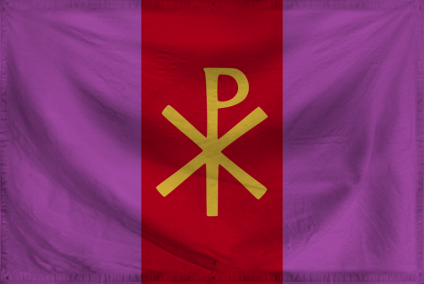 The Greater Holy Empire of Tagmatium is a gargantuan, safe nation, ruled by Holy Emperor Kommodos III with an iron fist, and notable for its frequent executions, punitive income tax rates, and stringent health and safety legislation. The compassionate, cynical, cheerful, devout population of 35.89 billion Tagmatines are ruled without fear or favor by a psychotic dictator, who outlaws just about everything and refers to the populace as "my little playthings."

The medium-sized, corrupt, socially-minded government juggles the competing demands of Defense, Law & Order, and Education. It meets to discuss matters of state in the capital city of Tagmatika. The average income tax rate is 84.1%, and even higher for the wealthy.

The frighteningly efficient Tagmatine economy, worth a remarkable 9,080 trillion Hyperpyron Nomismata a year, is quite specialized and mostly comprised of black market activity, especially in Tourism, Book Publishing, Arms Manufacturing, and Basket Weaving. State-owned companies are common. Average income is an amazing 253,005 Hyperpyron Nomismata, and distributed extremely evenly, with practically no difference between the richest and poorest citizens.

Nobody looks each other in the eye at neighborhood block parties any more, soldiers are issued comics about superheroes punching unflattering caricatures of their enemies, attempts to inform people about their unclaimed property are often mistaken for telephone scams, and there's a shortage of swinging hot spots as land development grinds to a halt. Crime is totally unknown, thanks to a capable police force and progressive social policies in education and welfare. Tagmatium's national animal is the Leopard, which is also the nation's favorite main course, and its national religion is The Enlightened Aroman Church.