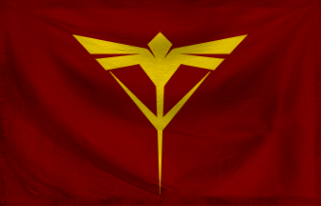 The Holy Lucky Gold Christmas of Char Aznable Neo Zeon is a gargantuan, socially progressive nation, ruled by St Patrick Spi£g£lG£ist Nick Santa with a fair hand, and renowned for its national health service, rampant corporate plagiarism, and stringent health and safety legislation. The hard-nosed, democratic, humorless, devout population of 38.224 billion Skivx are free to do what they want with their own bodies, and vote for whomever they like in elections; if they go into business, however, they are regulated to within an inch of their lives.

It is difficult to tell where the omnipresent, socially-minded government stops and the rest of society begins, but it juggles the competing demands of Education, Environment, and Healthcare. It meets to discuss matters of state in the capital city of WNZ Char Aznabl£ N£o Z£on City. The income tax rate is 100%.

The frighteningly efficient Skivx economy, worth a remarkable 5,970 trillion Gold Bars Gold Coin Candy Can£ Ch££s£s a year, is driven almost entirely by government activity, with private enterprise illegal. The industrial sector is solely comprised of the Information Technology industry. State-owned companies are the norm. Average income is an impressive 156,200 Gold Bars Gold Coin Candy Can£ Ch££s£s, and distributed extremely evenly, with little difference between the richest and poorest citizens.

Workers for the environmental protection agency are patted down for tartar sauce every morning, St Patrick Spi£g£lG£ist Nick Santa's office has a newly installed Max-Man arcade game programmed by a 5th-grader, Maxtopian villagers starve by the time Skivx officials even file the appropriate paperwork needed to help them, and doctors prescribe videos of political debates to patients with insomnia. Crime is totally unknown. Char Aznable Neo Zeon's national animal is the Zombi£ Monst£r L£pr£chaun R£ind££r Cow, which frolics freely in the nation's many lush forests, and its national religion is Skivx.

Char Aznable Neo Zeon is ranked 442nd in the world and 1st in Skivx for Largest Welfare Programs, scoring 15,045.71 on the Safety Net Mesh Density Rating.