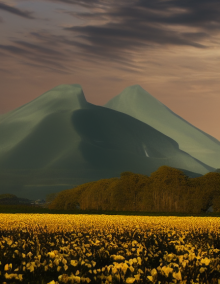 The Community of AA is a gargantuan, efficient nation, notable for its infamous sell-swords, fear of technology, and avant-garde cinema. The hard-nosed, cynical, devout population of 12.095 billion AAians are ruled without fear or favor by a psychotic dictator, who outlaws just about everything and refers to the populace as "my little playthings."

The large, corrupt, well-organized government juggles the competing demands of Defense, Industry, and Law & Order. The average income tax rate is 46.0%, but much higher for the wealthy.

The powerhouse AAian economy, worth 783 trillion Golds a year, is driven entirely by a combination of government and state-owned industry, with private enterprise illegal. However, for those in the know, there is a large, well-organized, quite specialized black market in Arms Manufacturing, Uranium Mining, Furniture Restoration, and Beef-Based Agriculture. The private sector mostly consists of enterprising ten-year-olds selling lemonade on the sidewalk, but the government is looking at stamping this out. Average income is 64,814 Golds, and distributed extremely evenly, with little difference between the richest and poorest citizens.

The annual budget is heralded by the Treasury Minister donning a fake plastic mustache and giant star-shaped glasses, the government is crossing the Rubicon in its levels of corruption, AA isn't the only thing that's falling apart, and it is well recognised that you can't sustain communism without a bit of spirit. Crime, especially youth-related, is totally unknown, thanks to a well-funded police force and progressive social policies in education and welfare. AA's national animal is the Elephant, which frolics freely in the nation's many lush forests.

AA is ranked 245,859th in the world and 36th in Lily for Highest Unexpected Death Rate, scoring 27.04 on the Bus Surprisal Index.