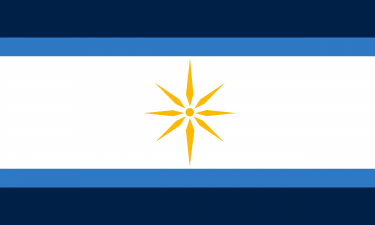 The Systems Alliance of Ventus Prime (elected 14 days ago)

The United Antillean Kingdom of Achipel

The embassy with Seora is being withdrawn. Closure expected in 2 days 4 hours.

New West Indies contains 67 nations, the 293rd most in the world.

The Most World Assembly Endorsements in New West Indies

World Census staff pored through World Assembly records to determine which nations were the most endorsed by others in their region.

As a region, New West Indies is ranked 33rd in the world for Most World Assembly Endorsements.

Hugo wondered what "doll" meant in these circumstances, but figured it was some secret code for something. He figured it was ideal for him to not speak about his political stance on mercenaries, corporations, or the military in general.
"That's.. cool, I guess."
He poured boiling water into the ramen (spicy chicken flavor) cup, before closing the lid.

"So.. how long do you think I'm going to have to stay here?"

Mei paused in thought. Considering the number of bodies we left behind and depending how big the caseId say a few days. She quickly put her hands up. But dont worry, by the time you get back Im sure everything will be resolved! She chuckled nervously.

This was, as you can imagine, an incredibly awkward conversation.
Hugo quickly shifted the conversation topic from covering up a murder.
"Uh.. so! Do you know where my, like, residence is going to be while I'm here?"

Oh uh She hadnt quite thought that one through. Im sure Big Sis can help out with thatI have a feeling Im gonna have to speak with her anyway. Her change in demeanor told him it might not be a pleasant conversation. I should warn you its nothing really nice, so uhI hope you dont mind that.

Is it an uncomfortable bed? If so.. I kinda have some sleeping problems - though hopefully they arent much of an issue. Also, do you need me to go with you to that meeting or something?

Well Will certainly didnt have issues with his, even though he was older. Its comfortable. That was all she could say about that. As for the meeting, its probably best since she is the uh, Boss around here. Dont worry though, shes much more chill than she puts on.

In a System Far, Far Away

Pentarum was a star on the far edge of the galaxy. Near that star was the planet of Napjeni, the home planet of the Vsimocni, a species that has thrived and evolved for millennia now. They were humanoid-looking, though their skulls were long-ended, almost reptilian.

The Vsimocni Hegemony spanned multiple systems, mostly in the southeastern part of the galaxy, but over time their territory has increased little by little. But it wasnt just by sheer force that they conquered new territories: the alien species they presided over looked up to them as gods, though this was a bit of an exaggeration.

The Vsimocni believed that all living beings comprised of two things: mind and body. A being could submit after a fight, being exhausted physically. But it didnt always mean they would be completely loyal. But if one could conquer, or compromise, the mind of one significant leader who others looked up to, it was more effective and in the end, it saved the Vsimocni the trouble of causing death and destruction. But for those who resisted, they would be met with a force unlike anything they had ever seen.

But while the Hegemony was powerful, they were not stupid. More importantly, they were patient. Instead of going against an equally powerful foe, they would study it, analyze it for its strengths and weaknesses. Then, and only then, once it was vulnerable would the Hegemony make its move.

The Vsimocni government was headed by a Council, and presiding over it was the Overseer. It would have been business as usual had one of its scouts not returned withinteresting information.

Councilmen and our dear Overseer Vudce, I bring enlightening news, the scout said, bowing formally to all those before him. Many years we have searched through the galaxy, to keep up with current affairs and at one point something significant happened: I am sure you are all aware of the Confederacy?

The council members all glanced at one another. The Confederacy of Independent Corporations, a corporation-state that relied on slaves and machines to do their dirty work. They were a dishonorable group, but their strength was undeniable.

Overseer Vudce, who sat in his chair, nodded to the scout. Of course. Something has happened?

Indeed, my Overseer. The Confederacy, as we know it, no longer exists. It is gone, their former captives now free.

It was a process that took many years, but there was only one culprit. They originally were called the Ventuan Republic but now refer to themselves as the Systems Alliance. From what weve gathered, their species has only traveled the stars for little less than two centuries, but their strength is no doubt undeniable, considering they were able to defeat the Confederacy. Theyve also managed to expand into a wide part of former Confederacy space.

The council was again quiet, taking all of this in. I thank you for this information, Vudce said, nodding. I believe the Council has much to discuss here. You may go now.

Once the scout left the large room, one of the council members finally spoke. This news sounds almost hard to believe. This Alliance managing to defeat such an imposing foe? Impossible.

It would seem our intel on the Confederacy wasoutdated, another argued. That being said, Overseer Vudce, I believe this warrants an investigation.

Vudce had his hands pressed together, deep in thought. Perhaps, he answered. This Alliance could be very beneficial to the Hegemonyor a possible threat. A investigation is certainly needed, as well as a possibletest. We must gather information, whether through intel or battle and then we will go from there.

Vudce then sat back in his seat. Yes, it was time to see what this Systems Alliance was capable of, being able to get rid of an annoying pest. They would either submit willingly, or face utter destruction.

The Free Land of Bucksden

took me a while
and yes this is another rp with ventus, i don't actively seek out rp partners very often so shush

There would be another surprise in store for her as she approached the asteroid, coming into view as the rocks obscuring the view conveniently parted. Raphtalia would find that she was correct in her assessment, it was indeed a station, carved into one of the biggest asteroids in the area. And in addition, moving around it were some vessels of designs she might find very familiar.
Let's just cut to the chase here, she'd stumbled upon Oseberg, in all of its... currently modest glory. But that would be enough for her.

Seeing this foreign ship approaching did cause a little alarm (last time that happened a local space rock had to give up its life before the situation could be cleared up), but the ship had enough recognizable elements, and proper identification, so the station's crew could breathe a sigh of relief. This was probably a friend, and if it wasn't, it was small enough to not be a big threat. It's nice when it's that simple.

Now, since then the station had expanded slightly, and it had also gotten some new leadership, and knowing which country we're talking about here, you can probably guess that it's an AI. It's the Bucksdenian special.
Heidi's batch of administrative units with a penchant for the battlefield had now gone their separate ways, temporarily at least since they're basically siblings, and one of them had ended up out on this station. It was supposed to be the original, the leader, but when another unit showed an interest in space and its many inhabitants, it was decided that they were better suited to the job.

This also meant that they were possibly going to... react to this particular visitor, considering both that she's a well-respected member of a different species, and a friend of Heidi's, but that's a bridge we'll cross when we get there.

It was definitely there in all its glory and Raphtalia realized she better say something so that they dont mistake her for an enemy and shoot her down. Though the ships she saw seemed rather familiar. Puffin ships? Raphtalia suddenly smiled. I seelooks like Heidi finally made that colony she always wantedor at least a step in that direction.

R6 chirped behind her as the small screen in front of her asked who Heidi was. Heidi? Shes a good friend of mine that I met awhile back. Youd like her since you two have a lot in common. R6 was apparently confused. Youll see, once you meet her.

She then opened up a channel. This is Raphtalia Iwatani of the Systems Alliance, ship ID V3821. My ship has a fuel leak and requesting assistance, over.

Hugo nodded. He was still pretty anxious about the whole thing, but he was hiding it better at this point, given that he now kinda knew these people.
"Alright then. Come tell me when, okay? I'm, like, really bad at remembering this kind of stuff."