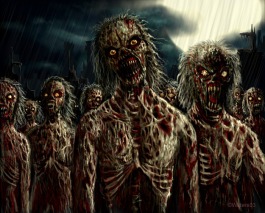 The Psychotic Depravity of Zombie 14 is a massive, efficient nation, ruled by Snowfall with an even hand, and renowned for its ubiquitous missile silos, disturbing lack of elderly people, and prohibition of alcohol. The hard-nosed, hard-working, humorless population of 4.661 billion Zombie 14ians are free to succeed or fail in life on their own merits; the successful tend to enjoy an opulent (but moralistic) lifestyle, while the failures can be seen crowding out most jails.

The minute, corrupt government, or what there is of one, juggles the competing demands of Industry, Defense, and Law & Order. It meets to discuss matters of state in the capital city of Lebazoa. Citizens pay a flat income tax of 1.7%.

The powerhouse Zombie 14ian economy, worth 637 trillion francs a year, is driven almost entirely by the private sector, which is fairly diversified and dominated by the Arms Manufacturing industry, with significant contributions from Woodchip Exports, Furniture Restoration, and Uranium Mining. Average income is an impressive 136,749 francs, but there is a vast disparity between incomes, with the richest 10% of citizens earning 1,056,416 per year while the poor average 4,671, a ratio of 226 to 1.

Abortion is only legal in unusual circumstances, rabbits are known to spontaneously explode without warning, scaffolding is built around scaffolding to give safe access, and foundling babies rarely make it off the doorsteps they are abandoned on. Crime, especially youth-related, is totally unknown. Zombie 14's national animal is the porpoise, which teeters on the brink of extinction due to heavy metals seepage into national waterways, and its national religion is Candy.