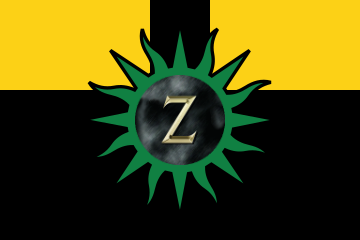 The Zocran Occupied Colony of Zocra-Nelson is a colossal, cultured nation, remarkable for its frequent executions, ban on automobiles, and enforced nudity. The hard-nosed, hard-working population of 6.688 billion Zocra-Nelsonians have some civil rights, but not too many, enjoy the freedom to spend their money however they like, to a point, and take part in free and open elections, although not too often.

The medium-sized government prioritizes Education, although Welfare, Healthcare, and Public Transport are also considered important, while Defense and Administration receive no funds. It meets to discuss matters of state in the capital city of Nadiaville. The average income tax rate is 27.2%, but much higher for the wealthy.

The strong Zocra-Nelsonian economy, worth 210 trillion Zurcais a year, is quite specialized and led by the Gambling industry, with major contributions from Book Publishing, Uranium Mining, and Woodchip Exports. State-owned companies are reasonably common. Average income is 31,408 Zurcais, and evenly distributed, with the richest citizens earning only 2.8 times as much as the poorest.

Almost all of Zocra-Nelson's water is piped into the country from abroad for exorbitant prices, Zocra-Nelson has designated Nadiaville as its capital city, the nation is currently revamping its entire education system, and prime commercial land is being swamped with archaeological teams. Crime, especially youth-related, is well under control, thanks to a capable police force and progressive social policies in education and welfare. Zocra-Nelson's national animal is the Dairy Cow.

Zocra-Nelson is ranked 176,081st in the world and 9th in United Alliances for Most Advanced Law Enforcement, scoring 688.97 on the Orwell Orderliness Index.