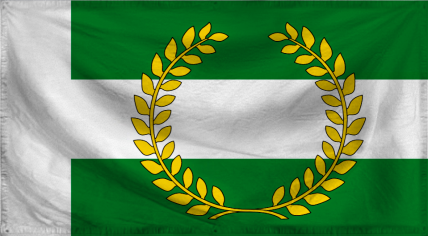 The Queendom of Zinnea is a massive, genial nation, ruled by High Queen Mouri with a fair hand, and remarkable for its national health service, compulsory military service, and stringent health and safety legislation. The compassionate, democratic, devout population of 2.701 billion Zinneans are free to do what they want with their own bodies, and vote for whomever they like in elections; if they go into business, however, they are regulated to within an inch of their lives.

The large government juggles the competing demands of Education, Healthcare, and Administration. It meets to discuss matters of state in the capital city of Qyoria. The average income tax rate is 57.9%, and even higher for the wealthy.

The Zinnean economy, worth 140 trillion Deiyas a year, is highly specialized and led by the Information Technology industry, with major contributions from Tourism and Arms Manufacturing. State-owned companies are reasonably common. Average income is 52,151 Deiyas, and distributed extremely evenly, with little difference between the richest and poorest citizens.

The reams of paperwork accompanying any electronic item are a recognised contributor to national deforestation, counselors have to sign pledges supporting gay rights before they can speak to any patients, one-man canoes fitted with the latest tracking technology leave no room for one man, and military barracks resemble five-star hotels. Crime, especially youth-related, is totally unknown, thanks to a capable police force and progressive social policies in education and welfare. Zinnea's national animal is the Honey Badger, which frolics freely in the nation's many lush forests, and its national religion is Pantheism.

Zinnea is ranked 14,924th in the world and 61st in Wintreath for Most Valuable International Artwork, with 19.28 Bank.