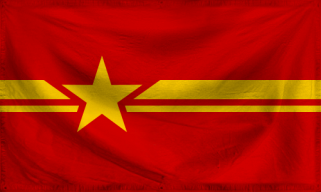 The United Socialist States of Zaratov is a gargantuan, orderly nation, ruled by Supreme Kommissar Sovyetskaga-Soyuza with an iron fist, and notable for its state-planned economy, compulsory vegetarianism, and devotion to social welfare. The hard-nosed, cynical, humorless population of 10.73 billion Zaratovians are ruled without fear or favor by a psychotic dictator, who outlaws just about everything and refers to the populace as "my little playthings."

The large, corrupt, moralistic, socially-minded, well-organized government is dominated by the Department of Defense, although Education and Law & Order are also considered important, while Spirituality and International Aid are ignored. It meets to discuss matters of state in the capital city of Derzhost. The income tax rate is 100%.

The frighteningly efficient Zaratovian economy, worth a remarkable 5,238 trillion Rubles a year, is driven entirely by a combination of government and state-owned industry, with private enterprise illegal. However, for those in the know, there is an enormous, deeply entrenched black market in Arms Manufacturing, Information Technology, and Beef-Based Agriculture. The private sector mostly consists of enterprising ten-year-olds selling lemonade on the sidewalk, but the government is looking at stamping this out. Average income is an amazing 488,244 Rubles, and distributed extremely evenly, with practically no difference between the richest and poorest citizens.

Maxtopians are both starving and giddy after the Zaratovian military unleashed its biological weapons, children who believe in the tooth fairy are frequently shipped off to Bigtopia, 90% of active duty ZAF personnel have been laid off and replaced by robot kill-drones, and residents of houses built on a foundation of wishful thinking are prone to an odd sinking feeling. Crime, especially youth-related, is totally unknown, thanks to a well-funded police force and progressive social policies in education and welfare. Zaratov's national animal is the Great Gray Owl, which soars majestically through the nation's famously clear skies, and its national religion is State Atheism.

Zaratov is ranked 31,272nd in the world and 24th in The Leftist Assembly for Largest Cheese Export Sector, scoring 4,654.14 on the Mozzarella Productivity Index.