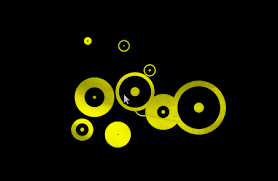 The Republic of Yellow Circles is a gargantuan, environmentally stunning nation, remarkable for its burgeoning lion population. The hard-nosed, cynical population of 10.69 billion Yellow Circlesians are ruled without fear or favor by a psychotic dictator, who outlaws just about everything and refers to the populace as "my little playthings."

The relatively small, moralistic, socially-minded, well-organized government juggles the competing demands of Defense, Welfare, and Healthcare. The average income tax rate is 17.9%, but much higher for the wealthy.

The large but underdeveloped Yellow Circlesian economy, worth 297 trillion Dollars a year, is broadly diversified and led by the Tourism industry, with major contributions from Cheese Exports, Beef-Based Agriculture, and Gambling. Black market activity is notable. State-owned companies are common. Average income is 27,848 Dollars, and distributed extremely evenly, with little difference between the richest and poorest citizens.

Crime is well under control, despite the fact that it is difficult to make it through a day without breaking one of the country's many laws. Yellow Circles's national animal is the lion, which frolics freely in the nation's many lush forests.

Yellow Circles is ranked 111,523rd in the world and 4th in The Doomsday Legion for Most Politically Apathetic Citizens, with 50 Whatever.