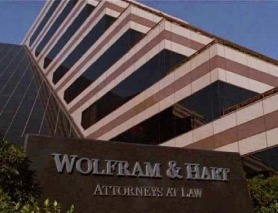 The Attorneys at Law of Wolfram and Hart is a colossal, efficient nation, remarkable for its otherworldly petting zoo, keen interest in outer space, and enforced nudity. The hard-nosed, hard-working, cynical, devout population of 7.007 billion Wolfram and Hartians are ruled by a mostly-benevolent dictator, who grants the populace the freedom to live their own lives but watches carefully for anyone to slip up.

The large, well-organized government prioritizes Law & Order, with Defense, Spirituality, and Industry also on the agenda, while Welfare and Public Transport aren't funded at all. The average income tax rate is 48.8%.

The thriving Wolfram and Hartian economy, worth 372 trillion souls a year, is quite specialized and led by the Uranium Mining industry, with major contributions from Trout Farming, Woodchip Exports, and Information Technology. Average income is 53,207 souls, with the richest citizens earning 5.1 times as much as the poorest.

Wolfram and Hart recently decided against having a capital city, all recreational drugs are legal, grazing lands are filled with cattle wearing odd-looking anti-pollution devices, and dubiously qualified Skandilundian barristers keep referring to laws as 'government guidelines'. Crime, especially youth-related, is totally unknown, thanks to the all-pervasive police force and progressive social policies in education and welfare. Wolfram and Hart's national animal is the demon, which teeters on the brink of extinction due to widespread deforestation.