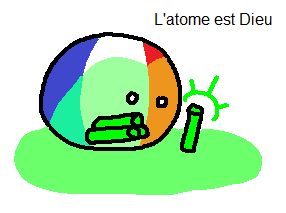 The Empire of Wolfenium is a gargantuan, efficient nation, ruled by Karl Franz von Wolfenstein with an iron fist, and renowned for its keen interest in outer space, strictly enforced bedtime, and sprawling nuclear power plants. The hard-nosed, cynical, humorless, devout population of 27.463 billion Wolfeners are ruled by a mostly-benevolent dictator, who grants the populace the freedom to live their own lives but watches carefully for anyone to slip up.

The relatively small, corrupt, well-organized government is primarily concerned with Defense, although Industry, Education, and Healthcare are also considered important, while Welfare and Environment aren't funded at all. It meets to discuss matters of state in the capital city of Wolfsburg. The average income tax rate is 53.4%.

The frighteningly efficient Wolfen economy, worth a remarkable 6,018 trillion thalers a year, is broadly diversified and led by the Arms Manufacturing industry, with significant contributions from Information Technology, Uranium Mining, and Retail. Black market activity is rampant. State-owned companies are common. Average income is an amazing 219,132 thalers, and evenly distributed, with the richest citizens earning only 4.0 times as much as the poorest.

State-sanctioned torture is okay so long as there's no icky blood, spontaneous nocturnal decapitation is considered 'death by natural causes' for enemies of Wolfenium, money always talks but the taboo subject of death just brings silence, and the hills are alive with the smell of burning flesh. Crime, especially youth-related, is totally unknown. Wolfenium's national animal is the eagle, which teeters on the brink of extinction due to toxic air pollution, and its national religion is Reformed Titanism.

Wolfenium is ranked 39,972nd in the world and 5th in SW Europe for Smartest Citizens, with 41.85 quips per hour.