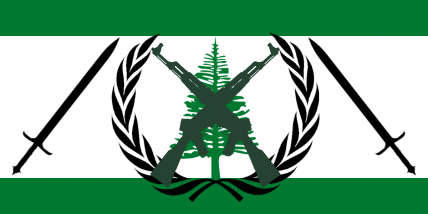 The Democratic Republic of Werfond is a massive, efficient nation, ruled by Grantham Baskin with an iron fist, and renowned for its public floggings, strictly enforced bedtime, and enslaved workforce. The hard-nosed, hard-working, cynical, humorless population of 1.728 billion Werfondians are kept under strict control by the oppressive government, which measures its success by the nation's GDP and refers to individual citizens as "human resources."

The medium-sized, corrupt, moralistic, well-organized government is dominated by the Department of Defense, although Law & Order and Education are also considered important, while International Aid and Welfare receive no funds. It meets to discuss matters of state in the capital city of Redwood Nyre. Citizens pay a flat income tax of 68.2%.

The frighteningly efficient Werfondian economy, worth 303 trillion Leaves a year, is fairly diversified and led by the Arms Manufacturing industry, with significant contributions from Information Technology, Tourism, and Retail. Black market activity is rampant. Average income is an impressive 175,519 Leaves, but there is a large disparity between incomes, with the richest 10% of citizens earning 898,642 per year while the poor average 18,822, a ratio of 47.7 to 1.

The stratosphere is full of "silent but deadly" attacks from Grantham Baskin's rear echelons, wildlife have trouble navigating the electric fences surrounding national forests, polychromatic seas of leaves blanket the ground while sewers and drain pipes are clogged by their detritus, and the government terminates employment with extreme prejudice. Crime, especially youth-related, is totally unknown, thanks to a capable police force and progressive social policies in education and welfare. Werfond's national animal is the Falcon, which soars majestically through the nation's famously clear skies, and its national religion is Tree worshipping.

Werfond is ranked 16,351st in the world and 11th in First World Order for Most Valuable International Artwork, with 15.71 Bank.