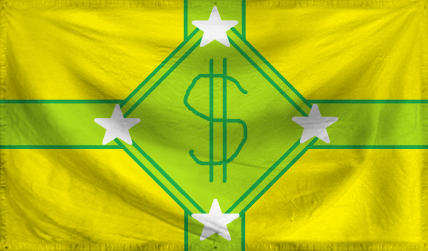 The Corporate Economic Zone of Wealthphalia is a huge, cultured nation, ruled by Chairman and CEO Ben Kaufmann with an even hand, and notable for its public floggings, enslaved workforce, and spontaneously combusting cars. The hard-nosed, hard-working, humorless population of 798 million Wealthphalians are either ruled by a sleek, efficient government or a conglomerate of multinational corporations; it's difficult to tell which.

The tiny, corrupt, pro-business government juggles the competing demands of Industry, Defense, and Education. It meets to discuss matters of state in the capital city of Kaufmann City. Citizens pay a flat income tax of 3.4%.

The frighteningly efficient Wealthphalian economy, worth 126 trillion Marks a year, is driven almost entirely by the private sector, which is broadly diversified and led by the Retail industry, with significant contributions from Arms Manufacturing, Uranium Mining, and Soda Sales. Average income is an impressive 158,873 Marks, but there is a vast disparity between incomes, with the richest 10% of citizens earning 1,439,732 per year while the poor average 2,061, a ratio of 698 to 1.

Strange lights seen in the sky are officially regarded as weather balloons or hoaxes and nothing else, giant no-kill traps baited with Bapst Red Ribbon and vintage bicycles have been popping up in back alleys nationwide, Wealthphalians believe manners maketh the leader, and male cubicle workers stand up every time a woman enters the room. Crime, especially youth-related, is moderate, with the police force struggling against a lack of funding and a high mortality rate. Wealthphalia's national animal is the Golden Lion, which is also the nation's favorite main course.

Wealthphalia is ranked 3,270th in the world and 12th in The League for Fattest Citizens, with 32.49 Obesity Rate.