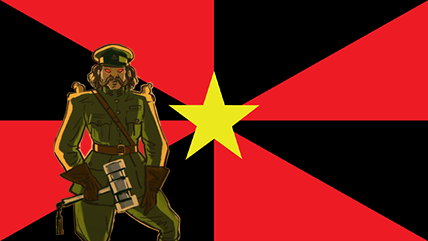 The Republic of Waterfallean is a massive, environmentally stunning nation, notable for its state-planned economy, absence of drug laws, and stringent health and safety legislation. The compassionate, democratic, devout population of 2.841 billion Waterfalleanians are fiercely patriotic and enjoy great social equality; they tend to view other, more capitalist countries as somewhat immoral and corrupt.

The medium-sized, socially-minded government juggles the competing demands of Welfare, Education, and Spirituality. The average income tax rate is 36.7%, but much higher for the wealthy.

The sizeable but sluggish Waterfalleanian economy, worth 84.4 trillion pesos a year, is driven entirely by a combination of government and state-owned industry, with private enterprise illegal. The industrial sector, which is broadly diversified, is led by the Cheese Exports industry, with major contributions from Basket Weaving, Door-to-door Insurance Sales, and Book Publishing. Average income is 29,703 pesos, and distributed extremely evenly, with practically no difference between the richest and poorest citizens.

Ambitious "businessmen" use their children to sell and advertise their products, the nation's once beautiful countryside has turned brown as farmers spray potent pesticides, everyone wants to be on the guest list for diplomatic parties, and Waterfallean has designated Waterfallean City as its capital city. Crime, especially youth-related, is totally unknown. Waterfallean's national animal is the panther, which frolics freely in the nation's many lush forests.

Waterfallean is ranked 96,874th in the world and 2,087th in the Rejected Realms for Most Politically Apathetic Citizens, with 51 Whatever.