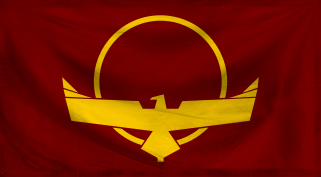 The Imperial Star Republic of Vocenae is a gargantuan, orderly nation, ruled by the Imperial Council with an iron fist, and notable for its anti-smoking policies, prohibition of alcohol, and public floggings. The hard-nosed, hard-working, cynical, humorless population of 33.642 billion Vocians are rabid consumers, partly through choice and partly because the government tells them to and dissenters tend to vanish from their homes at night.

The relatively small, corrupt, well-organized government juggles the competing demands of Defense, Law & Order, and Industry. It meets to discuss matters of state in the capital city of Vocia. The average income tax rate is 95.8%.

The frighteningly efficient Vocian economy, worth an astonishing 18,542 trillion Vocian Credits a year, is broadly diversified and led by the Arms Manufacturing industry, with major contributions from Uranium Mining, Soda Sales, and Information Technology. Average income is a breathtaking 551,171 Vocian Credits, with the richest citizens earning 5.2 times as much as the poorest.

Scenic mountain valleys are flooded with water as damming projects get underway, the government regularly hires contractors to construct high rise apartments, university graduates and new home-owners toil in labour camps to work off their debts, and military spending is on the increase. Crime is totally unknown, thanks to a capable police force and progressive social policies in education and welfare. Vocenae's national animal is the Ebony Eagle, which teeters on the brink of extinction due to toxic air pollution.

Vocenae is ranked 32,305th in the world and 23rd in The Local Cluster for Most Developed, scoring 73.91 on the Human Development Index.

Most Recent Government Activity: 115 minutes ago