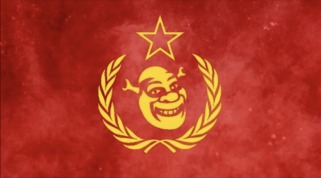 The capitalist oligarchy was unpopular among the people and its corruption was so severe that everyone wanted change. The tyrannical rule of the oligarchs caused mass death and famine with hundreds of thousands being executed or massacred in attempts to maintain power. This oppression would lead to the downfall of the capitalist swine.

An intellectual known as Shrek was born in 2060 and would become an influential political dissident. He became more and more powerful as time went on, using a form of nationalistic Stalinism and radical political positions to appeal to the working class. Despite attempts to have him arrested, the oligarchs failed and would inevitably be ogrethrown. He would lead a revolution and a civil war ensued, causing millions of deaths.

Finally, Shrek would gain absolute power in 2094 and purged the oligarchs who terrorized the proletariat for so long. He would consolidate power and establish a theocratic totalitarian state based around shrekism and would pave the way of VlaRiSsiAn dominance.

2 Birth of an Intellectual

4. End of War and Resulting Effects

Vlarissia, prior to the Shrekist Regime, was a far-right dominant-party authoritarian country with massive disparities in average income. The was a severely unfair economic hierarchy in which the peasant-class would receive only enough food and money to barely survive. At the top of the hierarchy were the aristocratic class, who had an immensely better lifestyle than everyone else. They have been later referred to as the bourgeoisie. Due to severe taxation of the peasant class, numerous famines have occurred, such as the Great Famine of 2060 where 7 million people starved to death. Persecution of the peasants was widespread during the capitalist period. Arbitrary arrests, slavery and executions were commonplace all across Vlarissia. An estimated 6,000 peasants were executed in the gallows each year. Millions lived in slavery in which they would undergo severe forced labor for no pay. About a tenth of those enslaved perished from exhaustion or torture. Hundreds of thousands of peasants were in prison for not paying their overlords enough money. Many peasants were angered by the oppression, and some would revolt. Massacres were routinely ordered to suppress all uprisings, causing tens of thousands of deaths. All of this, as well as the inept leadership of the latest president, Ivanov, would result in a brutal revolution that would establish a truly glorious empire.

Birth of an Intellectual

On April, 2060, the instability of the government was exposed as a brutal famine raged. The harvest that year was lower than usual but instead of doing something to help the people the oligarchs consolidated enormous amounts of food for themselves. As the people were starving, the oligarchs were stuffed. Famine overtook the vast nation and someone was needed to fix the problem that the bourgeoisie created. On that year, a being known as Shrek emerged into Vlarissia. He would become a political intellectual at a young age and would establish a new doctrine that took its roots from Stalinism and Chauvinism. It would be called Shrekism. He was an intellectual who was extremely charismatic and influential. He managed to create a cult of personality by 2084, and was worshipped by the proletariat, whom he referred to as the ogres. He spoke out against the greedy bourgeoisie and sparked mass protests across the nation. The government responded with massacres and mass imprisonment, but the movement gained strength. Shrek himself was imprisoned many times, but this only strengthened his personality cult. He wrote many famous works of literature and already though up a new constitution of his vision of Vlarissia.

By 2088, the Ogres Party was established and millions joined it. A militant group, known as the Bolshrekviks was also formed, and it participated in numerous militant insurgencies. As many tens of thousands of civilians were rounded or shot up by the government, tens of thousands more would emerge. The government carried out mass atrocities such as the 2089 Moscow incident where 20,000 protesters were massacred by the Vlarissian Military and the August terror which saw the execution of 50,000 suspected shrekists. These atrocities, among many others, caused the entire population to go against the government and aide the shrekist revolution. The June uprising, followed by the November revolution, would destabilize the governments power over the people. Vlarissia would be split between military factions, most notably the Green and White Armies. In late 2090, Vlarissia would fall into a devastating civil war.

Map of the Civil War during its most intense stages; Green is controlled by Shrekist forces and Red is by the Oligarchic Government
In the first couple years, the Green Army is heavily outnumbered and is on the defensive. When the war first broke out, Shreks forced were outnumbered ten to one. The Vlarissian Government mobilized 7 million troops against the 500,000 Bolshrekviks, in which they resorted to guerilla warfare to survive. There were times when the Green Army was surrounded by Vlarissian troops and almost defeated. But Shrek defied all odds and survived every time. The Shrekist militants would be forced to flee to Central Asia to regroup in 2091, but little did they know that this was the key to victory. With support from the majority of people, the shrekist army grew rapidly with millions of peasants seizing weapons and revolting. Numerous guerillas and militias joined the Green Army and fought back against their oppressors. The Vlarissian Government tried bombarding them with artillery or carpet bombing them, but they failed to put a dent in the rebellion. By the end of 2091, 2 million people were part of the Green Army.

It only got better from there. The battle of Tehran was one of the turning points, in which the Shrekist forces successfully pushed their enemies out of Southwest Asia would be a turning point. The Green Army in that battle only faced 100,000 casualties as opposed to the 400,000 casualties faced by the Vlarissian Capitalists. This battle among many others inspired millions more militants to join the Green Army. Millions of Government soldiers, demoralized and angry at their masters, defected to join Shrek. No matter how much support from allied countries the Oligarchs got, they could not stop the rebellion. Shrek began occupying more and more land, weakening his enemies and would make it his goal to liberate Moscow.

End of War and Resulting Effects
By the dawn of 2094, the Green Army would be 15 million strong, outnumbering the severely weakened and destabilized White Army. Victory after victory, the VlaRiSsiAn Ogres Republic would push the Capitalists all the way back to Moscow, forcing them into a defensive war. On October of 2094, the Green Army ogrewhelmed the defenses of the Oligarchs and liberated Moscow, renaming it Swampskow. After facing 700,000 military deaths, the green army finally won! The war was over and Shrek became supreme!

However, the civil war was horrific to say the least. Over 12.5 million people were killed in the 4 years of terror. Numerous war crimes and atrocities were orchestrated by both sides, leading to mass destruction on an unprecedented level making the war the worst one since WWIII. Massacres and enslavement became a ubiquitous tactic of both sides. The Vlarissian Government oversaw mass genocide against numerous indigenous ethnic groups, killing hundreds of thousands. The Green Army perpetrated the great patriotic extermination where 100,000 civilians were massacred upon occupying Yekaterinburg. Millions of people were raped or enslaved by both factions, with some calling the war the rape of Vlarissia. Entire cities were razed and chemical warfare became common. Scorched earth tactics on farmland led to millions starving to death, and mass repercussions for the environment. Deliberate atrocities and famine led to the deaths of 8.5 million civilians. Nationwide devastion and depopulation would help ensure Shreks cult of personality and would be used to further his repression.

VlaRiSsiA is Born
Upon liberating Moscow, Shrek would bring justice to the tyrannical oligarchs who screwed over the proletarian cause. Throughout the end of 2094, all the ologarchs and those accused of supporting them were rounded up and executed. Over a million people were killed for their ties to the oligarchs and all political dissidents would be imprisoned. All political power would be consolidated into Shrek and VlaRiSsiA would become a One-Party Absolutist Monarchy with absolute totalitarian control over every aspect of the peoples lives. A cult of personality was enforced around Shrek and criticizing him would be a capital crime. On October 16th 2094, the Shrekacratic Ogres Republic of VlaRiSsiA was established.