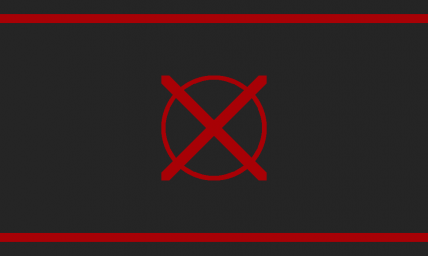 The Shadows Overlord of Visoraxus is a colossal, environmentally stunning nation, ruled by Visoraxus Holoratus Starkiller with an iron fist, and notable for its state-planned economy, punitive income tax rates, and restrictive gun laws. The hard-nosed, cynical, devout population of 6.3 billion Visoraxusians are ruled without fear or favor by a psychotic dictator, who outlaws just about everything and refers to the populace as "my little playthings."

The enormous, corrupt, moralistic, socially-minded, well-organized government juggles the competing demands of Defense, Spirituality, and Law & Order. It meets to discuss matters of state in the capital city of Durmengrad. The average income tax rate is 72.9%, and even higher for the wealthy.

The large but stagnant Visoraxusian economy, worth 108 trillion dollars a year, is driven entirely by a combination of government and state-owned industry, with private enterprise illegal. The industrial sector, which is quite specialized, is led by the Information Technology industry, with major contributions from Uranium Mining, Trout Farming, and Cheese Exports. Average income is 17,147 dollars, and distributed extremely evenly, with practically no difference between the richest and poorest citizens.

Mantis shrimp studies is academia's fastest-growing field, vital intelligence-gathering activities are put on hold as agents return home for seduction training and advanced poker instruction, foreigners are treated with great suspicion, and signs stating "You Must be This Tall to Enter" have started appearing outside retirement homes. Crime, especially youth-related, is totally unknown, thanks to the all-pervasive police force and progressive social policies in education and welfare. Visoraxus's national animal is the robot, which frolics freely in the nation's many lush forests.

Visoraxus is ranked 221,639th in the world and 9th in The Shadows for Most Rebellious Youth, scoring -9 on the Stark-Dean Displacement Index.