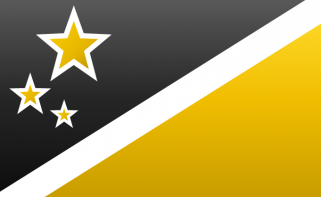 The Third Social Alliance of Verben is a gargantuan, genial nation, remarkable for its smutty television, pith helmet sales, and ubiquitous missile silos. The compassionate, cheerful, devout population of 18.166 billion Kyldellians are fiercely patriotic and enjoy great social equality; they tend to view other, more capitalist countries as somewhat immoral and corrupt.

The large, socially-minded government prioritizes Defense, although Education, Industry, and Law & Order are also considered important. It meets to discuss matters of state in the capital city of Dianamon City. The income tax rate is 100%.

The frighteningly efficient Kyldellian economy, worth a remarkable 9,790 trillion Rubies a year, is driven entirely by a combination of government and state-owned industry, with private enterprise illegal. The industrial sector, which is fairly diversified, is led by the Information Technology industry, with major contributions from Tourism, Arms Manufacturing, and Book Publishing. Average income is a breathtaking 538,966 Rubies, and distributed extremely evenly, with practically no difference between the richest and poorest citizens.

Students consistently complain that the wi-fi ate their homework, the police have been known to wiretap confessional boxes, the military is researching proton packs and PK-meters to combat "unseen enemy forces", and Maxtopian villagers starve by the time Kyldellian officials even file the appropriate paperwork needed to help them. Crime is totally unknown, thanks to a capable police force and progressive social policies in education and welfare. Verben's national animal is the Monster, which is also the nation's favorite main course, and its national religion is Morvolox.