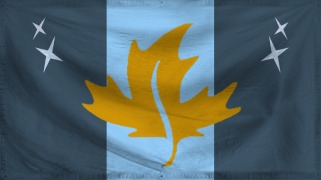 The Free Lands of Vancouvia is a gargantuan, safe nation, notable for its ubiquitous missile silos, multi-spousal wedding ceremonies, and devotion to social welfare. The compassionate, democratic population of 14.946 billion Vancouvians enjoy a sensible mix of personal and economic freedoms, while the political process is open and the people's right to vote held sacrosanct.

The enormous, outspoken government juggles the competing demands of Education, Industry, and Healthcare. It meets to discuss matters of state in the capital city of Vesuvius. The income tax rate is 100%.

The frighteningly efficient Vancouvian economy, worth a remarkable 3,225 trillion coves a year, is driven entirely by a combination of government and state-owned industry, with private enterprise illegal. The industrial sector, which is highly specialized, is mostly made up of the Information Technology industry, with significant contributions from Book Publishing. Average income is an amazing 215,814 coves, and distributed extremely evenly, with little difference between the richest and poorest citizens.

Seasonal hay-fever sufferers are attending government drug counselling sessions to get free doughnuts, restaurant owners fear visits from government officials more than the actual food critics, it's been a banner year for local vexillology, and evenings at university debating societies often end with everyone acknowledging both sides may well be right. Crime is totally unknown, thanks to a well-funded police force and progressive social policies in education and welfare. Vancouvia's national animal is the wild cow, which frolics freely in the nation's many lush forests.

Vancouvia is ranked 4,608th in the world and 16th in The Western Isles for Most Valuable International Artwork, with 151.05 Bank.

The Republic of Amia,