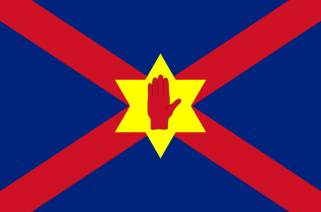 The Borderlands of Upper Ireland is a massive, genial nation, ruled by the Prime Minister with an even hand, and remarkable for its public floggings. The compassionate, hard-working, democratic, devout population of 4.905 billion Ulsterites have some civil rights, but not too many, enjoy the freedom to spend their money however they like, to a point, and take part in free and open elections, although not too often.

The relatively small government juggles the competing demands of Spirituality, Healthcare, and Environment. It meets to discuss matters of state in the capital city of Belfast. The average income tax rate is 18.8%, but much higher for the wealthy.

The Ulsteran economy, worth 239 trillion Euros a year, is led by the Furniture Restoration industry, with major contributions from Door-to-door Insurance Sales, Tourism, and Beef-Based Agriculture. Average income is 48,831 Euros, and evenly distributed, with the richest citizens earning only 2.5 times as much as the poorest.

Trails to natural wonders are littered with trash from reality film crews, the contraband cigarette trade is lighting up across Upper Ireland, education is transforming people into first-rate snobs, and the government has officially clarified that "wee on your hands to save time" does not count as proper hygiene. Crime is totally unknown. Upper Ireland's national animal is the Stoat, which frolics freely in the nation's many lush forests.

Upper Ireland is ranked 60,421st in the world and 12th in Reality for Most Politically Apathetic Citizens, with 52.16 Whatever.