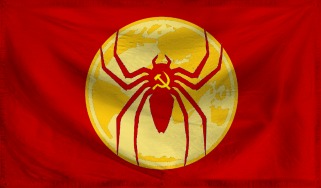 The Socialist Empire of Universal Utopian State is a gargantuan, socially progressive nation, ruled by Empress Tomacina vi Vetearnia with an even hand, and renowned for its parental licensing program, free-roaming dinosaurs, and irreverence towards religion. The compassionate, cheerful population of 22.175 billion Vetearn enjoy extensive civil rights and enjoy a level of social equality free from the usual accompanying government corruption.

The enormous, socially-minded government juggles the competing demands of Education, Environment, and Healthcare. It meets to discuss matters of state in the capital city of Central Administration. The income tax rate is 100%.

The frighteningly efficient Vetearn economy, worth an astonishing 10,047 trillion Francoes a year, is driven entirely by a combination of government and state-owned industry, with private enterprise illegal. The industrial sector, which is quite specialized, is mostly made up of the Information Technology industry, with significant contributions from Tourism, Book Publishing, and Arms Manufacturing. Average income is an amazing 453,096 Francoes, and distributed extremely evenly, with little difference between the richest and poorest citizens.

The nation is currently revamping its entire education system, soldiers find that home gadgets and power tools are more effective as improvised weapons than the guns they've been issued, the wearing and manufacture of fur apparel is banned, and visitors to Graffiti Warrens National Park are offered a complimentary tetanus vaccination. Crime, especially youth-related, is totally unknown, thanks to a capable police force and progressive social policies in education and welfare. Universal Utopian State's national animal is the Giant Spider, which frolics freely in the nation's many lush forests.

Universal Utopian State is ranked 263,923rd in the world and 8,006th in the Pacific for Largest Gambling Industry, scoring -48.75 on the Kelly Criterion Productivity Index.