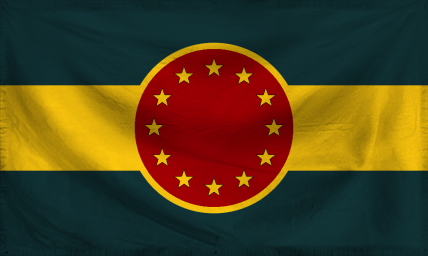 The Technocracy of United Atle Lamton is a huge, safe nation, notable for its vat-grown people, absence of drug laws, and punitive income tax rates. The hard-nosed, cynical population of 596 million Lamtonians are ruled by a mostly-benevolent dictator, who grants the populace the freedom to live their own lives but watches carefully for anyone to slip up.

The medium-sized, well-organized government juggles the competing demands of Defense, Education, and Healthcare. It meets to discuss matters of state in the capital city of Atlonia. The average income tax rate is 66.0%, and even higher for the wealthy.

The all-consuming Lamtonian economy, worth 66.3 trillion Lamtonian Credits a year, is broadly diversified and led by the Information Technology industry, with major contributions from Arms Manufacturing, Book Publishing, and Trout Farming. State-owned companies are common. Average income is an impressive 111,163 Lamtonian Credits, and distributed extremely evenly, with little difference between the richest and poorest citizens.

Guide dogs for the blind have been seen using government websites, road signs are getting harder to read under layers of knitted woolen cardigans, you need two tenors and a coloratura contralto to sing the national anthem properly, and getting an autograph has become harder than ever. Crime, especially youth-related, is totally unknown, thanks to a well-funded police force and progressive social policies in education and welfare. United Atle Lamton's national animal is the Horse, which is also the nation's favorite main course.

United Atle Lamton is ranked 157,108th in the world and 932nd in 10000 Islands for Least Corrupt Governments, with 92.7 percentage of bribes refused.