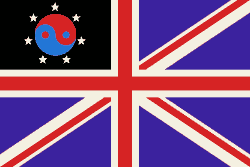 The Constitutional Monarchy of United Arcadian Republic is a gargantuan, environmentally stunning nation, ruled by Queen Elisabeth with an even hand, and notable for its smutty television, compulsory military service, and multi-spousal wedding ceremonies. The compassionate population of 14.382 billion United Arcadian Republicians are fiercely patriotic and enjoy great social equality; they tend to view other, more capitalist countries as somewhat immoral and corrupt.

It is difficult to tell where the omnipresent, corrupt government stops and the rest of society begins, but it juggles the competing demands of Defense, Education, and Healthcare. It meets to discuss matters of state in the capital city of United Arcadian Republic City. The average income tax rate is 97.8%.

The frighteningly efficient United Arcadian Republician economy, worth a remarkable 1,737 trillion gold dollars a year, is driven almost entirely by government activity. The industrial sector, which is highly specialized, is mostly made up of the Arms Manufacturing industry, with significant contributions from Book Publishing and Information Technology. Average income is an impressive 120,777 gold dollars, and distributed extremely evenly, with little difference between the richest and poorest citizens.

Shanty towns of homeless immigrants are the ideal recruiting ground for terrorist organisations, United Arcadian Republicians are regularly fired for looking at MyFace during their lunch breaks, moonshine has made a resurgence, and the police have been known to wiretap confessional boxes. Crime is totally unknown, thanks to the all-pervasive police force and progressive social policies in education and welfare. United Arcadian Republic's national animal is the peregrine falcon, which soars majestically through the nation's famously clear skies.

United Arcadian Republic is ranked 214,207th in the world and 102nd in Geopolity for Greatest Rich-Poor Divides, with 1.4 Rich To Poor Income Ratio.

Most Recent Government Activity: 88 minutes ago