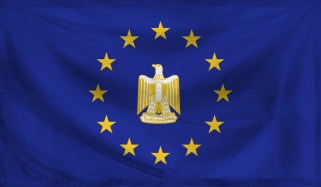 The Commonwealth of Union Princes is a gargantuan, environmentally stunning nation, notable for its museums and concert halls, ubiquitous missile silos, and frequent executions. The hard-nosed, cynical population of 11.42 billion Unionists are ruled with an iron fist by the dictatorship government, which ensures that no-one outside the party gets too rich. In their personal lives, however, citizens are relatively unoppressed; it remains to be seen whether this is because the government genuinely cares about its people, or if it hasn't gotten around to stamping out civil rights yet.

The enormous, corrupt government juggles the competing demands of Defense, Law & Order, and Education. It meets to discuss matters of state in the capital city of Krieg. The average income tax rate is 95.2%.

The frighteningly efficient Unionist economy, worth a remarkable 1,368 trillion Union Dollar Coins a year, is highly specialized and led by the Arms Manufacturing industry, with major contributions from Trout Farming, Information Technology, and Book Publishing. State-owned companies are reasonably common. Average income is an impressive 119,798 Union Dollar Coins, and distributed extremely evenly, with little difference between the richest and poorest citizens.

Thieves find battery shops juicier targets than banks, the poor are forced into bankruptcy by their energy bills, professionals are ready to retire by the time they receive permission to use their credentials, and a favorite "life hack" for gap year backpackers is to pretend to be homeless for government handouts. Crime, especially youth-related, is totally unknown, thanks to the all-pervasive police force and progressive social policies in education and welfare. Union Princes's national animal is the Bald Eagle, which soars majestically through the nation's famously clear skies, and its national religion is Atheism.

Union Princes is ranked 293,518th in the world and 859th in Europeia for Fattest Citizens, with 5.61 Obesity Rate.