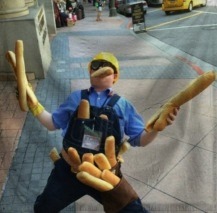 The Bread Loving Folk of Under Upper Antartica is a colossal, cultured nation, ruled by Bread Mann with an even hand, and notable for its public floggings, pith helmet sales, and complete absence of social welfare. The hard-nosed, humorless, devout population of 5.008 billion Under Upper Antarticans have some civil rights, but not too many, enjoy the freedom to spend their money however they like, to a point, and take part in free and open elections, although not too often.

The relatively small, corrupt government prioritizes Defense, with Administration, Environment, and Spirituality also on the agenda, while International Aid and Welfare receive no funds. It meets to discuss matters of state in the capital city of Breadtown. The average income tax rate is 16.4%, but much higher for the wealthy.

The very strong Under Upper Antartican economy, worth 599 trillion People a year, is driven entirely by a combination of government and state-owned industry, with private enterprise illegal. However, for those in the know, there is a large, well-organized, quite specialized black market in Arms Manufacturing, Gambling, Retail, and Uranium Mining. The private sector mostly consists of enterprising ten-year-olds selling lemonade on the sidewalk, but the government is looking at stamping this out. Average income is an impressive 119,658 People, and distributed extremely evenly, with little difference between the richest and poorest citizens.

A vast monorail network carries people all over the country, no one is quite sure what many government officials look like, artists are pillars of society, and farting etiquette is taught in schools. Crime, especially youth-related, is all-pervasive, perhaps because of the country's complete lack of prisons. Under Upper Antartica's national animal is the Narwhale, which frolics freely in the nation's sparkling oceans, and its national religion is Toast.

Under Upper Antartica is ranked 234,045th in the world and 8,541st in The East Pacific for Most Advanced Public Education, scoring 146.59 on the Edu-tellignce® Test Score.

The island of Kiria,