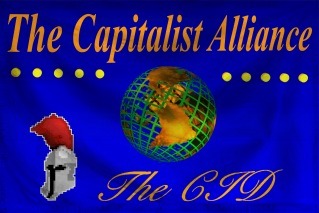 The CID WA Puppet of UNDelegate is a gargantuan, efficient nation, ruled by CID with an even hand, and renowned for its daily referendums, keen interest in outer space, and sprawling nuclear power plants. The hard-nosed, hard-working, democratic, cheerful, devout population of 18.489 billion CIDians have some civil rights, but not too many, enjoy the freedom to spend their money however they like, to a point, and take part in free and open elections, although not too often.

The relatively small government juggles the competing demands of Industry, Education, and Law & Order. It meets to discuss matters of state in the capital city of Saint-CID. The average income tax rate is 16.2%, but much higher for the wealthy.

The frighteningly efficient CIDian economy, worth a remarkable 3,493 trillion Golden Shares a year, is fairly diversified and led by the Information Technology industry, with major contributions from Tourism, Retail, and Book Publishing. State-owned companies are reasonably common. Average income is an impressive 188,976 Golden Shares, and distributed extremely evenly, with little difference between the richest and poorest citizens.

The nation's prisons are touted as the best weight loss programs money can't buy, flipping a coin to make a decision leads to a referral to Gambling Addiction Services, a common response to government PSAs is "well, DUH, obviously", and sex education has become an intricate maze of stick figures and complex metaphors. Crime, especially youth-related, is totally unknown, thanks to a capable police force and progressive social policies in education and welfare. UNDelegate's national animal is the Prancing Horse, which frolics freely in the nation's many lush forests, and its national religion is Roman Catholic Church.

UNDelegate is ranked 220,505th in the world and 288th in Capitalist Paradise for Most Armed, with 0.17 Weapons Per Person.