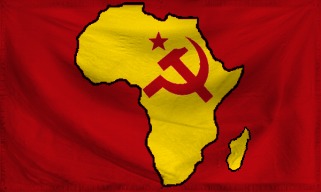 The Democratic Union of Uinted Communist of Africa is a colossal, genial nation, ruled by King Emillio Joesph 'Stalin' Myles III with a fair hand, and notable for its pith helmet sales, infamous sell-swords, and compulsory gun ownership. The compassionate, democratic, cheerful, devout population of 8.633 billion Africans love a good election, and the government gives them plenty of them. Universities tend to be full of students debating the merits of various civil and political rights, while businesses are tightly regulated and the wealthy viewed with suspicion.

The enormous, socially-minded, outspoken government prioritizes Education, with Environment, Administration, and Healthcare also on the agenda, while Defense receives no funds. It meets to discuss matters of state in the capital city of Cairograd. The income tax rate is 100%.

The frighteningly efficient Uinted Communist of African economy, worth a remarkable 2,324 trillion E-bits a year, is driven entirely by a combination of government and state-owned industry, with private enterprise illegal. The industrial sector, which is quite specialized, is led by the Information Technology industry, with major contributions from Book Publishing and Tourism. Average income is an amazing 269,253 E-bits, and distributed extremely evenly, with practically no difference between the richest and poorest citizens.

The reams of paperwork accompanying any electronic item are a recognised contributor to national deforestation, the government awards prizes to television shows featuring stereotype-breaking minority roles, the nation is stuck in permanent election mode as politicians demand constant do-overs, and solving crossword puzzles requires fluency in at least five languages. Crime, especially youth-related, is totally unknown, thanks to a capable police force and progressive social policies in education and welfare. Uinted Communist of Africa's national animal is the Africanized Ebony Panther, which frolics freely in the nation's many lush forests, and its national religion is Christianity.

Uinted Communist of Africa is ranked 217,781st in the world and 975th in The Communist Bloc for Rudest Citizens, with 6.11 Insults Per Minute.