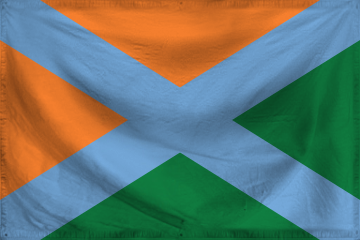 The Democratic Republic of U0-180 is a massive, safe nation, remarkable for its ubiquitous missile silos, frequent executions, and stringent health and safety legislation. The compassionate population of 4.829 billion U0-180ians are prohibited from doing almost everything except voting, which they do timidly and conservatively.

The large government juggles the competing demands of Defense, Law & Order, and Education. The average income tax rate is 35.9%, but much higher for the wealthy.

The large but inefficient U0-180ian economy, worth 144 trillion baht a year, is fairly diversified and led by the Retail industry, with major contributions from Cheese Exports, Door-to-door Insurance Sales, and Furniture Restoration. State-owned companies are common. Average income is 29,982 baht, and distributed extremely evenly, with little difference between the richest and poorest citizens.

The military is researching proton packs and PK-meters to combat "unseen enemy forces", tampons are used as cheap fishing bobbers, people who tease dwarfs are being cut down to size, and rural communities are all but disenfranchised as politicians focus all their attention on winning the deciding urban votes. Crime, especially youth-related, is totally unknown, thanks to a very well-funded police force and progressive social policies in education and welfare. U0-180's national animal is the cobra, which teeters on the brink of extinction due to widespread deforestation.