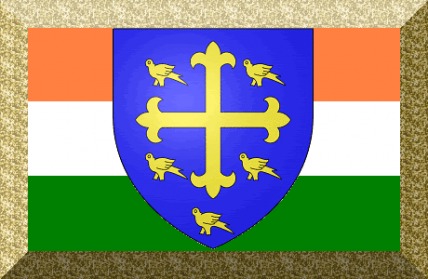 The Nifty Republic of Tzorsland is a gargantuan, socially progressive nation, ruled by Imperial Leader Lucifer with an even hand, and remarkable for its digital currency, anti-smoking policies, and infamous sell-swords. The hard-nosed, humorless population of 37.882 billion Tzorslanders have some civil rights, but not too many, enjoy the freedom to spend their money however they like, to a point, and take part in free and open elections, although not too often.

The minute, corrupt government, or what there is of one, prioritizes Defense, with Law & Order, Industry, and Education also on the agenda, while Social Policy and Welfare receive no funds. It meets to discuss matters of state in the capital city of Eyesore. Income tax is unheard of.

The frighteningly efficient Tzorslandian economy, worth an astonishing 15,855 trillion Tzors a year, is broadly diversified and led by the Information Technology industry, with major contributions from Arms Manufacturing, Retail, and Uranium Mining. Black market activity is extensive. State-owned companies are common. Average income is an amazing 418,552 Tzors, and evenly distributed, with the richest citizens earning only 2.7 times as much as the poorest.

The nation has a strict 'no marauding undead' law (Tzorsland has found 5 easter eggs), wars of expansion are described as "peacekeeping operations", returning vacationers often find that their property is now a construction site, and there is a growing belief that consciousness is a simulated illusion within a computer-generated reality. Crime, especially youth-related, is totally unknown. Tzorsland's national animal is the wild turkey, which teeters on the brink of extinction due to widespread deforestation, and its national religion is The Eye of Harmony Cult.

Tzorsland is ranked 243,771st in the world and 10,278th in Osiris for Most Rebellious Youth, scoring -81 on the Stark-Dean Displacement Index.