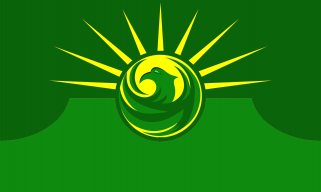 The Sylvan Hivə of Turbeaux is a gargantuan, cultured nation, ruled by Chairman Shəng-ji Yang with a fair hand, and remarkable for its multi-spousal wedding ceremonies, daily referendums, and feral children. The compassionate, democratic, cheerful population of 10.647 billion Transhumans hold their civil and political rights very dear, although the wealthy and those in business tend to be viewed with suspicion.

The enormous, corrupt, liberal, outspoken government juggles the competing demands of Education, Administration, and Environment. It meets to discuss matters of state in the capital city of Nacəllə. The income tax rate is 100%.

The frighteningly efficient Sylvan economy, worth a remarkable 4,594 trillion gluons a year, is driven entirely by a combination of government and state-owned industry, with private enterprise illegal. However, for those in the know, there is an enormous, deeply entrenched, quite specialized black market in Information Technology, Book Publishing, Tourism, and Soda Sales. The private sector mostly consists of enterprising ten-year-olds selling lemonade on the sidewalk, but the government is looking at stamping this out. Average income is an amazing 431,484 gluons, and distributed extremely evenly, with little difference between the richest and poorest citizens.

Vegetables are crisper thanks to CRISPR, truancy levels are on the rise ever since school registers were banned, tax-payers are funding ever more extravagant movie projects, and people accuse the government of being in bed with Big Safety. Crime, especially youth-related, is so common that it is unusual to encounter someone following the law, perhaps because of the country's complete lack of prisons. Turbeaux's national animal is the mind worm, which frolics freely in the nation's many lush forests, and its national religion is Quantum Məchanics.

Turbeaux is ranked 270,218th in the world and 252nd in Forest for Largest Automobile Manufacturing Sector, scoring -14.97 on the Henry Ford Productivity Index.

Ecologist Hegemony, and 4 others.