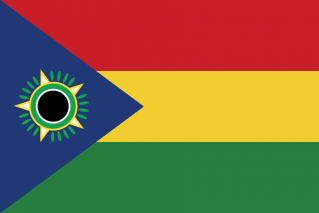 The Republic of Tropico is a colossal, environmentally stunning nation, ruled by El Presidente with a fair hand, and notable for its burgeoning parrot population. The hard-nosed, hard-working, democratic population of 8.409 billion Tropicans enjoy a sensible mix of personal and economic freedoms, while the political process is open and the people's right to vote held sacrosanct.

The relatively small, outspoken government juggles the competing demands of Defense, Education, and Law & Order. It meets to discuss matters of state in the capital city of Puerto Libre. The average income tax rate is 17.2%, but much higher for the wealthy.

The Tropicoan economy, worth 396 trillion pesos a year, is led by the Beef-Based Agriculture industry, with significant contributions from Automobile Manufacturing, Door-to-door Insurance Sales, and Uranium Mining. Average income is 47,115 pesos, and evenly distributed, with the richest citizens earning only 2.9 times as much as the poorest.

Glittering new sports stadiums adorn every city and town, Tropico has designated Puerto Libre as its capital city, El Presidente has just been declared ruler of Tropico in an international press conference, and Roman Catholicism has been named as Tropico's national religion. Crime is almost non-existent, thanks to a capable police force and progressive social policies in education and welfare. Tropico's national animal is the parrot, which is also the nation's favorite main course, and its national religion is Roman Catholicism.

Tropico is ranked 82,123rd in the world and 1st in Tropico for Highest Poor Incomes, with 26,675.26 Standard Monetary Units.