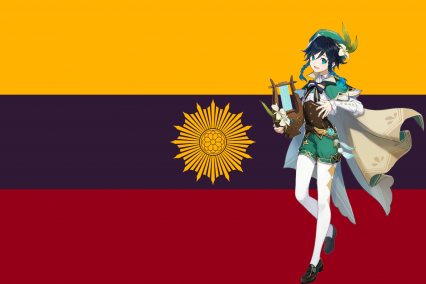 The Tone-Deaf Bard of Tracian Empire is a gargantuan, genial nation, ruled by Emperor Julius I of Thrace with an even hand, and notable for its daily referendums, multi-spousal wedding ceremonies, and punitive income tax rates. The compassionate, devout population of 16.819 billion Thracians have some civil rights, but not too many, enjoy the freedom to spend their money however they like, to a point, and take part in free and open elections, although not too often.

The large, corrupt government juggles the competing demands of Defense, Education, and Law & Order. It meets to discuss matters of state in the capital city of Vathora. The average income tax rate is 84.3%, and even higher for the wealthy.

The frighteningly efficient Thracian economy, worth a remarkable 2,094 trillion Auriols a year, is quite specialized and led by the Tourism industry, with significant contributions from Arms Manufacturing, Book Publishing, and Information Technology. State-owned companies are common. Average income is an impressive 124,557 Auriols, and distributed extremely evenly, with little difference between the richest and poorest citizens.

Supervisors in Tracian Empire commonly tie bells on their necks to alert employees of their presence, Emperor Julius I of Thrace has more friends than ever before, five-year-olds who refuse to line up on command get gold stars, and parking's carefree without parking car fees. Crime is totally unknown, thanks to a well-funded police force and progressive social policies in education and welfare. Tracian Empire's national animal is the Imperial Eagle, which soars majestically through the nation's famously clear skies, and its national religion is Vayonism.

Tracian Empire is ranked 252,613th in the world and 20th in International Northwestern Union for Largest Pizza Delivery Sector, scoring -23.37 on the Pepperoni Propulsion Productivity Index.