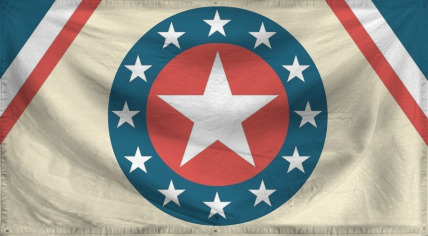 The Protectorate of Thermodolian WA Mission is a huge, genial nation, remarkable for its barren, inhospitable landscape, compulsory military service, and irreverence towards religion. The hard-working population of 632 million Thermodolian WA Missionians have some civil rights, but not too many, enjoy the freedom to spend their money however they like, to a point, and take part in free and open elections, although not too often.

The large government juggles the competing demands of Healthcare, Welfare, and Education. The average income tax rate is 40.2%, but much higher for the wealthy.

The strong Thermodolian WA Missionian economy, worth 31.0 trillion Thermas a year, is broadly diversified and led by the Retail industry, with major contributions from Book Publishing, Soda Sales, and Arms Manufacturing. Average income is 49,019 Thermas, and evenly distributed, with the richest citizens earning only 2.5 times as much as the poorest.

No personal detail is too tiny for the suede-denim census police, it is illegal to make racist remarks in public, scientists regularly clone human beings for research purposes, and a well-funded social safety net protects the unfortunate. Crime, especially youth-related, is totally unknown, thanks to a capable police force and progressive social policies in education and welfare. Thermodolian WA Mission's national animal is the WA Nomes, which teeters on the brink of extinction due to widespread deforestation.

Thermodolian WA Mission is ranked 96,505th in the world and 3,372nd in The East Pacific for Lowest Crime Rates, with 63.46 law-abiding acts per hour.