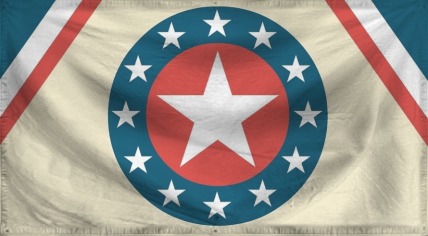 The National Republic of Thermodolia is a gargantuan, safe nation, ruled by President Jacob Zarman with a fair hand, and renowned for its sprawling nuclear power plants, smutty television, and devotion to social welfare. The hard-nosed, democratic, humorless population of 15.32 billion Thermodolians hold their civil and political rights very dear, although the wealthy and those in business tend to be viewed with suspicion.

The medium-sized, corrupt, liberal, outspoken government juggles the competing demands of Education, Defense, and Law & Order. It meets to discuss matters of state in the capital city of Thermodolia City. The average income tax rate is 82.4%, and even higher for the wealthy.

The frighteningly efficient Thermodolian economy, worth a remarkable 3,099 trillion Thermas a year, is fairly diversified and led by the Information Technology industry, with major contributions from Tourism, Arms Manufacturing, and Retail. State-owned companies are common. Average income is an amazing 202,327 Thermas, and distributed extremely evenly, with little difference between the richest and poorest citizens.

Getting an autograph has become harder than ever, there's a lot of smoke from the nation's "green economy", psychiatrists that date patients are congratulated on their romantic conquests, and reddish-brown is the new black. Crime is totally unknown, thanks to a well-funded police force and progressive social policies in education and welfare. Thermodolia's national animal is the Thermodolian Black Bear, which frolics freely in the nation's many lush forests, and its national religion is Thermodolian Christianity.

Thermodolia is ranked 11,173rd in the world and 1st in Vaporwave Paradise for Nudest, with 219.25 Cheeks Per Square Mile.