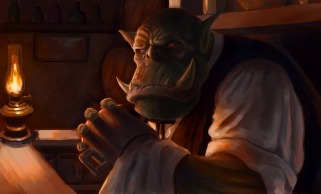 Background Story (Legion of the Cuke)


The Return of the Evil King

Background Story
Once banned by an alliance of mortals and gods from the NationStates reality, the powerful

TheVeggyKing, makes use of a loophole in the structure of the universe to reconnect to our dimensions.

However, to be able to lift his curse, he has to regain power over parts of NationStates.

By mischance, this loophole solely allows him to enter the pantry of the bar on the corner.


Since the evil veggy king is trapped in the pantry, he won't get all the information about the Legion's actual activity. Thus, the Legion will also be able to do other stuff, like rescuing pretty princesses etc.

State of the roleplay is currently...
... that the bar is hiring 'adventurers' for the Legion of the Cuke but there are just rumors why.

TheVeggyKing and the Legion members haven't met yet.

The Great Irresponsibility of TheOrc