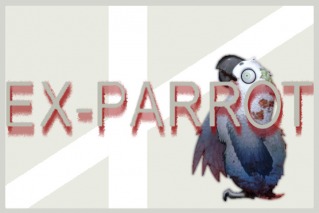 The Republic of The Zombie Parrot is a gargantuan, orderly nation, ruled by The Not Quite Undead Parrot with an iron fist, and notable for its barren, inhospitable landscape, ubiquitous missile silos, and ritual sacrifices. The hard-nosed, hard-working, cynical population of 10.279 billion Zombie Parrots are ruled by a mostly-benevolent dictator, who grants the populace the freedom to live their own lives but watches carefully for anyone to slip up.

The medium-sized, corrupt, well-organized government juggles the competing demands of Defense, Industry, and Administration. It meets to discuss matters of state in the capital city of The Perch in the Graveyard. Citizens pay a flat income tax of 36.1%.

The frighteningly efficient Zombified economy, worth a remarkable 1,159 trillion dead fleshes a year, is fairly diversified and led by the Arms Manufacturing industry, with major contributions from Retail, Uranium Mining, and Soda Sales. Black market activity is rampant. Average income is an impressive 112,850 dead fleshes, but there is a significant disparity between incomes, with the richest 10% of citizens earning 332,098 per year while the poor average 30,193, a ratio of 11.0 to 1.

100-year-old politicians are now a thing of the past, nano-zombified remainss of ambassadors are the current fad sweeping the nation, shivering secretaries type letters under torrential downpours in open-roof offices, and the Smalltopian embassy doubles as an electoral campaign headquarters. Crime is a serious problem, perhaps because of the country's complete lack of prisons. The Zombie Parrot's national animal is the zombified remains of ambassadors, which teeters on the brink of extinction due to widespread deforestation.

The Zombie Parrot is ranked 25,347th in the world and 3rd in Monty Python for Highest Average Incomes, with 112,850.51 Standard Monetary Units.