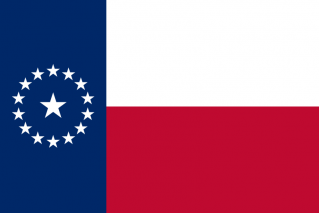 The Republic of
The United Confederacy of Texas
Civil Rights Lovefest

As the modern world continues to evolve in military means, we also continue to adapt to protect our nation. Here are some of our most recent programs, along with a description.

DX-1118 C: An evolutionary chimeric virus created from the Redlight virus. DX-1118 C, referred to as the Blacklight virus by the military or the Mercer Virus by the public, has a violent way of attacking the body, and the changes caused by DX-1118 C are so drastic that 99.99% of those infected die. DX-1118, however, has a weaker mortality rate compared to it's predecessor, DX-1118 A or the Redlight virus. The pathogen has been used for many projects, but has never been released on enemy troops in accordance to the second Geneva Protocol, instead being injected into willing subjects. The only way to actually create DX-1118 C is by blood taken from those infected by DX-1118 C.The public name for the virus was due to the man who synthesized the virus strain, Alex Mercer. Recently, Mercer, along with other scientists have taken steps to using the virus to cure diseases such as cancer.

Super Soldiers: This program utilizes the DX-1120 virus, itself a variant of the

DX-1118 C virus. DX-1120, however, had no mortality rate, instead causing the subjects injected with the strain to have faster cellular regeneration, along with enhanced strength, speed, and height. They have been able to actually demolish tanks, but can be killed by other programs.

Prototypes: Individuals infected with DX-1118 C. These individuals, however, have a specific DNA structure that prevented them from dying. Instead, the individuals have superhuman strength, speed, sight, and durability. The Prototypes also have the ability to craft weapons from their limbs, and have a disturbing way of infiltrating areas: by "consuming" the DNA of people, they can assume their identities, effectively becoming the victim. Consuming also allows the Prototype to self-regenerate, but are susceptible to parasites, anti-viruses, and if seriously wounded too much, they cannot regenerate.

Evolved: A variant to the Prototype, the Evolved are similar yet different at the same time. For example, the Evolved can only craft one weapon, but are on both limbs instead of one. Another is that they cannot "glide," or use the virus to propel themselves in the air, but are instead able to run at a faster pace than the Prototypes. The Evolved can only be created by releasing a corrupted version of the Whitelight antivirus against soldiers, and even then, few transform.

DX-1118 A: The original virus strain developed as a bioweapon, DX-1118 A has now been established to continue development of new programs. Similar to DX-1118 C, DX-1118 A, or Redlight, has a vicious mortality rate of 99.999%, but it's spread is different. DX-1118 A only targets certain individuals, only spreads to a certain range, has a higher mortality rate, and a shorter incubation period. The only similarities between the two strains are their inability to cross large bodies of water.

Substance A-113A: The first antivirus developed, Bloodtox, or Substance A-113A, was developed to stop DX-1118 C in the case of an accidental leakage, but has now been designed to also stop corrupted Whitelight from spreading. Notably, Bloodtox can be inhaled by non-infected civilians, but is dangerous to both Prototypes and Evolved. Bloodtox has now been placed as a last resort against viral outbreaks.

Whitelight: Another antivirus developed as the first step to preventing accidental leakage, Whitelight has also shown unique capabilities when corrupted. By adding the blood cultures of Prototypes, Whitelight can transform soldiers into Evolved, but this can only happen with soldiers of certain DNA structures, while others die a brutal death. To prevent this, scientists have examined the DNA structures of test subjects, then use the ones that resisted the infection to compare with volunteers.

Parasite: Organisms developed from both DX-1118 C strands and the DNA of Prototypes. The Parasites are similar to cancers, spreading throughout the body of either Prototypes or Evolved, feeding on the body and causing extreme pain. The Parasite prevents the victim from using any weapons or can change their appearance, but cannot impair any other abilities. However, unlike the viruses, the Parasite can be killed by a cure.

Swarm Nanorobotics: Recently developed by Xymos Technology Inc., these small robots have been developed using artificial intelligence, creating a self-aware organism. The nanobots have been designed to attack by swarm, usually eliminating enemies by suffocation. Although the swarms have been regulated by the Republican Armed Forces, there have been incidents of "rogue swarms," which have developed to the point of operating by itself. These swarms are much more dangerous than their military counterparts due to their method of attack: by attacking a victim, the swarm develops a pseudo-symbiotic relationship with the host, creating a much stronger, more contagious being, all the while the host is slowly devoured and used to create new swarms. Today, the swarms are used as surveillance: if a person commits a Level 3-6 infraction, the swarm will either attach itself to the criminal, sending a GPS signal to all nearby authorities, the swarm restrains the criminal until police arrive, or in the case of a military assault, the swarm can use a weaker version of the rogue swarm; by replicating the appearance of a nearby soldier or Agent, the swarm can attack enemies by either the usage of weapons or by using the suffocation tactic used by most swarms.

Here, a swarm is in the form of an Agent while battling an unseen foe. Also,

here is the only piece of recorded evidence of a rogue swarm is seen.

10. Power Armor: Originally plans from the American defense contractor West Tek in the 2050s, the designs were recovered by operatives of the Most Serene Republic within the Washington D.C. Dead Zone in the 2160s. Plans for deployment were halted due to the Banner Revolution in 2176, though sets of the first designs (T-45d power armor) were made as prototypes for deployment in the continent's Exclusionary Zone - these sets were used on the homefront in the North American War (the newly formed Mobile Heavy Infantry) in defending the Red River from the Lakotah Republic's forces, taking out landmines and supplying units with both ordnance and additional support. As the War drew to a close in the early 2180s, power armor production increased ten-fold, with the T-45d being deployed to the AEZ in support of the Knights of New England (a pseudo-medieval unit of soldiers determined to unify the region under the New American Republic), but the issues involving heat and movement in the hot wasteland of the AEZ led to an agreement to hand the suits to the KNE. In the post-war era, expeditionary squadrons made extensive use of the T-45d and were later granted the usage of prototypes derived from Republican scientists: while effective, the suits required massive amounts of energy to fuel, leading to their abandonment in the late 2180s. At the same time, the T-45d was being phased out in favor of West Tek's succeeding design to the set, the T-51b power armor. In comparison to its predecessor, the T-51b proved to be superior in all standards, with poly-laminants and specialized materials designed to enhance the survival of soldiers in long combat tours, with the metal-based T-45d now simply a veteran's outfit. The T-51b, while advanced, were surpassed by a set wholly developed by Republican scientists: the Hellfire set. The new set was made with an even more resistant material termed "Duraframe" and developed to withstand heat, radiation, and bullet fire, rendering the T-51b obsolete as fast at it had been considered the pinnacle of Republican armor. The Hellfire set also managed to out-compete the Devastator Power Armor, which relied on a mix of materials from the T-45d and T-51b sets while appearing completely different from its predecessors, though the sets are produced in limited amounts due to its capabilities. Today, power armor has become a standard sight for most mechanized and motorized infantry units, though widespread deployment has not commenced due to the issues concerning development for both domestic and foreign operations, such as the War of the Northeast.

11. NATran Connection System: Developed in the late 2180s to compliment power armor and DART 6, the NATran (Neural-Axial-Transcendence) System relies on the placement of a neural connection platform with the nervous system, connection set within the upper shoulder region of the spine: wires built in the terminal ports of the NATran connect with the biochip located in the pituitary gland, connecting the person with the armor and achieving full connection. The NATran System was designed to combat the connection issues seen in the T-45d power armor, which required an asbestos-lined undersuit to connect the joints and protect the wearer from heat problems and fully meet the capabilities of the power armor: while it completed the expectation of the development team, the installation for NATran is one of the most brutal, easily outmatching the DART 6 installation. Installation for NATran requires the patient to remain fully conscious and not receive anesthesia (placement of NATran requires all mental functions stay as close to full operation as possible) as the platform is settled into place. Once the terminal is installed, NATran's ports are connected for the first time: if the system is active, the user is able to fully operate all power armor sets with no issue. If NATran fails, however, the patient may lose the ability to walk and will require a continuous period of care with the Vitruvian machine (even then, the repairs will take over 5 years to fully recover themselves). As power armor varies in strength and effectiveness, along with the brutal conditions that must be weathered for connection, many soldiers in the Armed Forces opt to avoid NATran as best as possible, and criticism has been leveled in the scientific community regarding the sacrifices needed to maintain NATran for those that have successfully connected. Further risks include the possibility of hackers taking control of a connected user and implanting viral software into the system, along with health issues such as heart attacks, aneurysms, seizures, and "internal pacification," which is a mass shutdown of the organs and neural systems.

The Republic of The United Confederacy of Texas