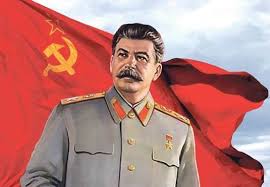 The Glorious People's Republic of The Stalinist Union is a gargantuan, cultured nation, ruled by The Communist Party with an iron fist, and remarkable for its keen interest in outer space, sprawling nuclear power plants, and strictly enforced bedtime. The hard-nosed, cynical, humorless population of 26.373 billion Comrades are ruled by a mostly-benevolent dictator, who grants the populace the freedom to live their own lives but watches carefully for anyone to slip up.

The enormous, corrupt government juggles the competing demands of Defense, Law & Order, and Education. It meets to discuss matters of state in the capital city of Stalingrad. The average income tax rate is 98.8%.

The thriving Stalinist economy, worth a remarkable 4,042 trillion People's surpluses a year, is driven entirely by a combination of government and state-owned industry, with private enterprise illegal. The industrial sector, which is quite specialized, is led by the Arms Manufacturing industry, with major contributions from Uranium Mining, Information Technology, and Tourism. Average income is an impressive 153,295 People's surpluses, and distributed extremely evenly, with little difference between the richest and poorest citizens.

Couples are discouraged from marrying until they can rank their partner on a scale of one to ten, dessert dishes make up the Stalinist breakfast menu, soldiers are equipped with multi-million People's surplus battlesuits, and state dairy cow's milk is a shear-thickening fluid that can stop small-caliber bullets. Crime, especially youth-related, is totally unknown, thanks to the all-pervasive police force and progressive social policies in education and welfare. The Stalinist Union's national animal is the Fox, which frolics freely in the nation's many lush forests, and its national religion is atheism.

The Stalinist Union is ranked 26,192nd in the world and 1,399th in Osiris for Most Developed, scoring 77.97 on the Human Development Index.