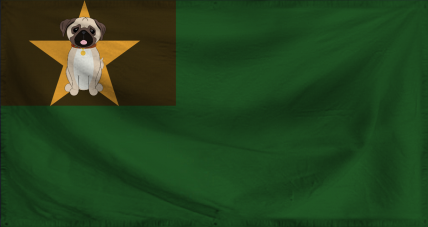 The Amazing Land of The Pug Islands is a colossal, efficient nation, ruled by Puggy with an even hand, and renowned for its zero percent divorce rate, ubiquitous missile silos, and restrictive gun laws. The compassionate population of 5.471 billion Pugeese are fiercely patriotic and enjoy great social equality; they tend to view other, more capitalist countries as somewhat immoral and corrupt.

The large, corrupt, socially-minded government juggles the competing demands of Law & Order, Administration, and Education. It meets to discuss matters of state in the capital city of Pugville. The average income tax rate is 64.2%, and even higher for the wealthy.

The powerhouse Pug Islandsian economy, worth 525 trillion pugs a year, is led by the Tourism industry, with major contributions from Book Publishing, Information Technology, and Retail. Black market activity is extensive. State-owned companies are common. Average income is 96,129 pugs, and distributed extremely evenly, with practically no difference between the richest and poorest citizens.

Jabbing a baby's bottle at officials gets parents waved straight through immigration, the Super-Spud Cinematic Universe is breaking box office records, minor parties are virtually absent in Parliament, and the military will start wars with other nations on a lark. Crime, especially youth-related, is totally unknown, thanks to a well-funded police force and progressive social policies in education and welfare. The Pug Islands's national animal is the pug, which frolics freely in the nation's many lush forests.

The Pug Islands is ranked 131,711th in the world and 173rd in Forest for Most Extreme, scoring 20.47 on the Paul-Nader Subjective Decentrality Index.